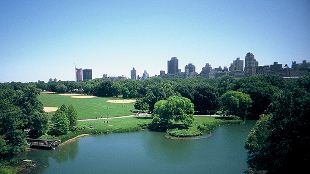 Central Park in New York CityFLICKR, KEVIN DOOLEYThe soil of New York City’s Central Park is bursting with biodiversity spanning all three domains of life, according to a study published today (October 1) in Proceedings of the Royal Society B. In fact, the urban environment harbored as many different microbial species as diverse biomes around the world, including the soils of the arctic, desert, and tropical locales.

“This is an excellent work [that] demonstrates the vast diversity of soil community, most of which remained undescribed,” microbial ecologist Brajesh Singh of the University of Western Sydney in Australia wrote in an e-mail. “Interestingly they found that belowground diversity from urban and managed soils have similar diversity to some of known natural ecosystems, which indicate the high resilience of belowground diversity to anthropogenic pressures.”

“It was an exciting day. We had the coolers and shovels and dorky little hats,” recalled Ramirez, who is now a postdoc at the Netherlands Institute of Ecology in Wageningen. “It was successful, though. We finished all sampling in one day.”

The next day, the team sieved the samples with at AMNH and shipped them to Yale, where researchers measured basic characteristics of the soil itself, including pH, moisture content, and carbon and nitrogen concentrations. Samples were also shipped to the University of Colorado, where collaborators analyzed the biological content of their samples, sequencing 16S and 18S rRNA to characterize the archaeal, bacterial, and eukaryotic composition of the microbiome. In the end, the group found that Central Park’s microbial diversity was on par with biodiversity seen around the world.

Given the diversity of the park’s environment, which includes wooded areas, fields, and landscaped gardens, “I expected to find quite a bit of [bacterial] biodiversity,” said Ramirez. But the finding that the eukaryotic “biodiversity in Central Park almost rivaled the global [diversity], that was pretty exciting and surprising,” she added. “This work highlights that even in a location that is well known and visited by millions of people a year, we still have a lot to learn about that biodiversity below our feet.”

“I have never read anything of this kind of research,” said soil microbiologist Adriano Sofo of the University of Basilicata in Potenza, Italy. “They found that the microorganisms of Central Park in New York are representative of the microorganisms in other parts of the planet.” The next step, he added, will be to see if other urban sites harbor similar amounts of microbial diversity, and to study how the communities change during different times of the year.

Singh emphasized the importance of such research. “Drivers of belowground diversity and distribution pattern remain largely unknown,” he said. “Such knowledge is key to advance our understanding, which can be incorporated in future in management and conservation policies in order to protect ecosystem services provided by these organisms.” (See “Fighting Microbes with Microbes,” The Scientist, January 2013.)