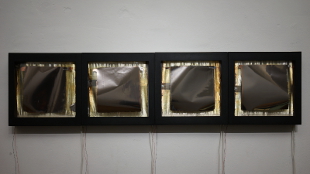 “My work is always based on finding ways to [stretch] boundaries with technologies,” says Jacobs, founder and co-director of the Brussels-based sound-art space Overtoon.

Several years ago, Jacobs began working with polyvinylidene difluoride (PVDF), a foil that can serve as the loudspeaker for his recordings. He noticed that as he bent the foil, the sound changed. “I was really fascinated by this phenomenon,” he says. So he began to search for a way to manipulate the...

Last year, Jacobs got in touch with Silvain Michel, an electroactive polymer specialist at the Switzerland-based material science and technology institution EMPA, who has been working with these materials for more than a decade. Interested in the intersection of art and science, Michel quickly agreed to collaborate with Jacobs to see how they could use the polymers to “change the shape of [the PVDF foil] to get another color of sound,” Michel says.

Jacobs spent a couple of weeks at EMPA, working with Michel to test the feasibility of the approach, developing prototypes to see how different design parameters would affect the sound. “It’s a question of positioning different modules of electroactive polymers,” Michel says. “We have a nice spectrum of possible deformation.”

Armed with this knowledge, Jacobs headed back to Overtoon to create his installation: a sort of “living” speaker that could autonomously manipulate the playback of sounds recorded in a Romanian forest by applying an electrical charge to change the shape of the PVDF foil. “This stimulation, the way it contracts, what happens is that the reflections of the sound will bounce around and will create this kind of natural filter,” says Jacobs. “That’s what I was really interested in.”

In the end, he devised a four-module display, with each PVDF foil emitting the playback of the Romanian forest recording, while the electrically activated polymers warped the foils to give a richer sound. The “shhh” of wind blowing through the trees is “a very clean noise that is not really colored,” Jacobs explains. “The color happens when you change the shape.” In addition, the wind sounds are occasionally cut by a sharp creaking noise: the bending of trees.

Altogether, the sounds come alive, Jacobs says, almost like the listener is standing in that forest. “The sound becomes an image,” he says. “I’m really interested in this kind of imagery that happens just with using a sound.”

The installation, coproduced by Liquid Things and Overtoon, will be on display through February 14.