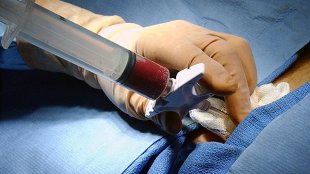 WIKIMEDIA, AXELBOLDT.Therapeutic transfer of virus-specific T cells to immunocompromised patients can help battle life-threatening infections, but the process for generating such cells is lengthy and laborious. A paper published today (June 25) in Science Translational Medicine, however, suggests a speedy alternative. Ten days in culture was all it took for researchers to generate multivirus-specific T cells that, when transferred into transplant patients, could wipe out multiple infections at once.

“Making T cells for therapy has always been a nightmare,” said John Barrett, an expert in allogenic stem cell transplants from the National Heart, Lung, and Blood Institute in Bethesda, Maryland, who was not involved in the study. “The importance of this [new] approach is that it is a little bit simpler and more rapid to generate these T cells . . . and that is actually a practical breakthrough,” he said. “As a step towards making a product...

In the months following a bone marrow transplant, before the immune system has regenerated, patients are “wide open to infection with viruses,” said Ann Leen, a professor of pediatrics at Baylor College of Medicine in Houston, Texas, who led the new research. Although antiviral drugs can sometimes help, they are ineffective against certain viruses and can have severe side effects.

Giving virus-fighting T cells from donors to transplant patients or other immunocompromised individuals can be very effective at clearing up infections.  But, said Leen, “the original manufacturing processes were really convoluted and complicated.” They involved using live viruses to infect donor B cells, and then using those cells to stimulate T cells. “With all that, we are talking 10 to 12 weeks of manufacturing,” Leen said. Furthermore, the live viruses in question are considered biohazards. When a procedure is that difficult and hazardous, said Leen, “it’s never going to go beyond specialized academic centers.”

Leen’s team has streamlined the process, bypassing the live virus and B cell steps, and instead stimulating the T cells directly with peptides. A similar technique has been used previously to generate T cells specific for fighting cytomegalovirus. But the new method extends the concept, using a mix of peptides that together cover the antigenic proteins of five of the most common viruses to infect transplant patients—cytomegalovirus, adenovirus, Epstein-Barr virus, BK virus, and human herpes virus 6.

Importantly, when active T cell preparations were transferred into bone marrow transplant patients suffering viral infections the cells led, in almost all cases, to resolution of the infections. In eight patients treated, 15 of 18 total infections among the individuals were resolved, while one was reduced. Three additional patients were given the T cells prophylactically and remained infection-free for more than three months.

The varying ability of the T cell preparations to tackle multiple viruses is thought to be due to the donor’s prior exposure to the viruses in question, said Barrett. That is, if the donor has not tackled the virus before then, their blood would lack the necessary memory T cells. A future goal, he said, would be “generating such antigen-specific T cells from naive cells as opposed to people who have already got a T cell memory to the antigens.”

Despite the room for improvement, Jose Montoya, a professor of medicine at Stanford University, suggested that “this is a treatment strategy that any center seeing these patients should have in their therapeutic armamentarium.”

“Over the past 24 years, I've seen too many [stem-cell transplant] patients losing their battle to adenovirus, BK virus, EBV, HHV-6 and CMV,” he wrote in an e-mail. “I hope to one day soon be able to offer [multivirus-specific T] cells as a therapeutic option.”