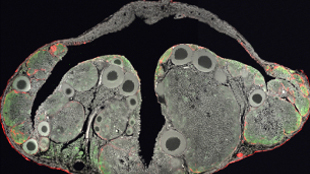 Foxl3 -/- medaka ovary with both oocytes (large round ovals) and sperm (smaller dots). Black T-shape is cavity into which matured oocytes are ovulated.TOSHIYA NISHIMURA, MINORU TANAKA, NATIONAL INSTITUTE FOR BASIC BIOLOGY, OKAZAKI, JAPANSomatic cells in the gonads of a developing vertebrate provide germ cells with cues, such as hormones, to develop into sperm or eggs. Studying the ways these cues affect a germ cell’s commitment to become sperm or eggs, Toshiya Nishimura from the laboratory of Minoru Tanaka at the National Institute for Basic Biology in Okazaki, Japan, and colleagues uncovered a single gene that, when missing from female embryos of the Japanese rice fish, or medaka (Oryzias latipes), leads the fish to produce functional sperm soon after hatching. The team’s results, published today (June 11) in Science, suggest that—at least in medaka—spermatogenesis must be suppressed for oogenesis to proceed normally, and that sperm...

“This is exciting because it is absolutely unexpected,” said Manfred Schartl, who studies gonadal development at the University of Würzburg in Germany and was not involved in the current study. “That these germ cells have genetically determined sexual fate is new.”

The gene, foxl3, is an ancient lineage duplicate of the foxl2 gene, which is known to be involved in mammalian ovary formation. But the function of foxl3 was previously unclear. “In mammals, foxl2 is well known to antagonize male somatic cell fate and now foxl3, at least in medaka, seems to antagonize male germ cell fate,” said Josephine Bowles, a senior research fellow at the University of Queensland in Australia who studies sex determination in mammals and was not involved in the study.

The team created two medaka mutants that resulted in no detectable expression of the FOXL3 protein. In female homozygous mutant fish, spermatogenesis within the ovary was detectable one week after the fish hatched—three weeks earlier than the typical timing of male puberty, when sperm production starts in these fish. While spermatogenesis within the ovary was somewhat irregular, the resulting sperm were viable. Extracted ovary-produced sperm fertilize half of the eggs of wild-type female fish, and the majority of these fertilized eggs hatched. Other than producing sperm, the mutant fish were overtly female, and the absence of foxl3 did not affect the development of their surrounding somatic gonadal cells. The researchers detected some oocytes within the sperm-producing ovaries of some mutant fish.

Because the sperm could form in the context of female signaling and hormones, the results suggest that male germ cells may not register regulatory signals from female somatic cells, Tanaka told The Scientist in an e-mail.

It’s unclear whether the results in medaka will have any impact on the study of sex determination in mammals, said Allan Spradling, a developmental biologist at the Carnegie Institution for Science in Baltimore, Maryland, who was not involved in the work.

The team is now studying how foxl3 is regulated, what it regulates, and how this gene is linked to the factors that determine sex in the somatic cells of the gonads in medaka, Tanaka said.

“It’s a surprising study and, technically, wonderful,” said Schartl. “It gives a lot for us [developmental biologists] to think about.”