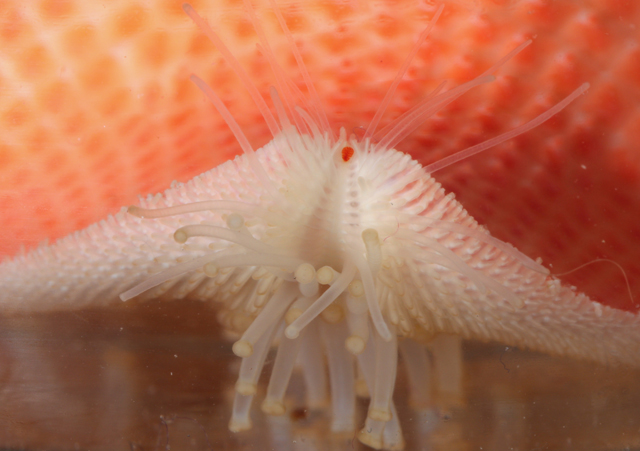 Tremaster mirabilis bends an arm to direct its gaze.MARIE HELENE BIRK, UNIVERSITY OF COPENHAGENSome animals that spend their whole lives in the dark—species of fish that thrive in caves, for instance—have dispensed with eyes all together. But in a study published today (February 7) in Proceedings of the Royal Society B, researchers have shown that several types of starfish that live in the deep ocean have working compound eyes at the tips of their arms, much like related species that dwell in shallower water.

“There’s been a lot of work over the years on vision in a variety of fish from shallow water to the deep sea, but there hasn’t been much at all done on vision in animals that sit on the bottom,” says Thomas Cronin, a biologist at University of Maryland, Baltimore County, who did not participate in the work. “It’s a been...

While earlier studies had shown that some starfish that live in shallower, brighter water have and use compound eyes, no one had previously looked at animals occupying the sea floor. “What you see in many other animal groups is that, when you venture deeper into the sea and light intensities get low, either they lose eyes and rely on other senses or the eyes are modified in ways where they are optimized to be very sensitive to low light intensities but with low spatial resolution,” says coauthor Anders Garm, a marine biologist at the University of Copenhagen.

To investigate starfish visual capacity, Garm and colleagues collected hundreds of the animals, representing 13 different species living just under the surface to more than 1,000 meters deep in the North Atlantic off the Greenland coast, using large, wide-mouth nets dragged behind research vessels. They examined the echinoderms and found that 12 of the 13 species had compound eyes on the undersides of the tips of their arms, similar to what had been shown for other starfish previously. The only starfish without eyes was a burrowing species that lives in shallower waters.

Among the animals with compounds eyes, the researchers observed, the starfish left their eyes uncovered and bent the ends of their arms to varying degrees, sending their gaze in different directions. One of the deep-water dwellers, Novodinia americana, had the largest visual field and had sharp acuity, among the sharpest observed in a starfish. Another species found well below the ocean’s surface, Diplopteraster multipes, was the most sensitive to light. 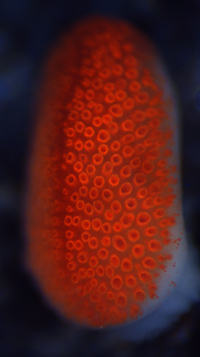 Compound eye of Hippasteria phrygiana, a starfish found 150-1,200 meters below the surface of the Atlantic Ocean off the coast of GreenlandMARIE HELENE BIRK, UNIVERSITY OF COPENHAGEN

“There’s vanishingly little known about vision on the sea floor in the deep sea,” says Sönke Johnsen, a biologist at Duke University who did not participate in the study. “For the longest time, most vision research—really all of it—was about insects and vertebrates. It’s been fun now that people are getting into all kinds of other [animals] and seeing what their capabilities are. As you might expect, their capabilities are better than we thought,” he adds.

The scientists also determined that both N. americana and D. multipes were bioluminescent, meaning that they could produce flashes of light. The authors hypothesize that the animals take advantage of this bioluminescence to communicate in the dark, where many animals have lost sight. “It’s a semi-secure line to use if you don’t want everybody to listen in to your signaling,” says Garm. The animals may produce light to warn others about predators or as part of mating behavior, he adds.

Johnsen cautions that a possible link between functional eyes, bioluminescence, and visual communication needs more investigation. “One next step would be some sort of actual behavioral experiment,” he says. “The most difficult problem in the deep sea is that we have no real observation of undisturbed behavior,” he explains. “It’s exceedingly difficult to do because almost anything we bring down into that environment is incredibly intrusive.”

Garm plans to use a remotely operated submarine that could set up camp on the ocean floor to capture images of starfish using bioluminescence with low-light cameras as the animals go about their business. But in the mean time, he is also interested in investigating how the starfish eyes communicate with their nervous systems to influence behavior.

“Echinoderms will never stop surprising us,” says Maria Ina Arnone, a biologist at Stazione Zoologica Anton Dohrn in Napoli, Italy, who was not involved in the work. Learning more about how these animals can see or detect light will help researchers not only understand how vision evolved in vertebrates, she says, but could also help humans innovate and create new types of sensors that can detect light in different conditions, for example. “There is a lot that nature can still tell us,” she adds.