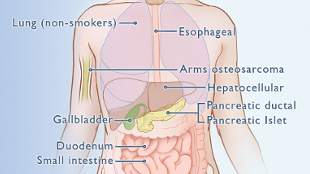 While genetic and lifestyle factors can influence whether a person develops cancer, according to a study published in Science today (January 1), random chance also appears to play a major role.

Cancer rates among adult tissues vary substantially. For example, a person’s risk of getting lung cancer is more than 11 times that of developing brain cancer—and eight times greater than that of stomach cancer. Researchers have attributed these differences in cancer rates to environmental risk factors, such as smoking or exposure to ultraviolet light, as well as to heritable mutations. But neither environmental factors nor inherited genetic variation can fully explain the substantial variability in cancer rates across tissues. Moreover, the total numbers of cells that make up these tissues also cannot explain varying cancer risk.

Researchers at Johns Hopkins University have now found a third factor that...

Plotting lifetime cancer risk versus the total number of stem cell divisions left little doubt about this strong relationship, which applied even for cancers with 100,000-fold differences in lifetime risk, Vogelstein told The Scientist.

“The message is straightforward and clear,” said Giovanni Parmigiani a statistician and chair of the department of biostatistics and computational biology at the Dana-Farber Cancer Institute in Boston, who was not involved in this study but has previously collaborated with the authors. “I am very impressed with this study,” he added. “It is very simple, but provides a very important insight into cancer etiology.”

Tom Hudson, president and scientific director of the Ontario Institute for Cancer Research in Toronto, Canada, who was also not involved, agreed. “The finding is remarkable,” he wrote in an e-mail to The Scientist. “It is rather difficult to disagree that the correlation is very strong.”

The idea that the number of cell divisions and the number of somatic mutations—and therefore, increased cancer risk—are linked is not new, but “the approach taken here to evaluate the level of correlation is original,” said Hudson.

Vogelstein and Tomasetti reasoned that because there are minuscule differences in the mutation rates of different human cell types, the number of stem cell divisions within an organ over one’s lifetime might explain cancer risk. Most fully differentiated cells, even those that have accumulated mutations, do not seed a tumor because of their short lifespan. But stem cells are longer-lived, self-renew, and give rise to clonal cell populations within a tissue.

The study confirms that some cancers, such as lung, have a large environmental component, and could be largely prevented, noted Vogelstein. “We have to be careful not to make people think that they will get cancer no matter what they do.”

On the other hand, the results also emphasize the randomness of certain cancers. For all cancers, the experts stressed, early detection remains vital. “If this work puts more research money into development of better methodologies of early detection that would be great news,” said Tomasetti. “Epidemiological studies have shown that lives can be saved through prevention and early detection,” added Hudson.

Vogelstein and Tomasetti are now analyzing one of two missing pieces of the study—the rate of breast stem cell divisions. Neither breast nor prostate cancers were included in the study because there are no satisfactory data on the stem cell division rates for these tissue types. The estimation for breast tissue is particularly complex because the rate of division is not linear with time (as it is for colon and other tissues).

This new focus on stem cell division rates “will give us a lens to study many concepts that we have not understood well in cancer,” said Parmigiani. “It will likely change the way cancer research and prevention will be done in the future.”

Clarification (March 23, 2017): The subheading on this article has been updated from its original version to clarify that the researchers did not weigh the contributions to cancer risk of mutations randomly acquired as a result of DNA replication errors against those associated with heritable and environmental factors.