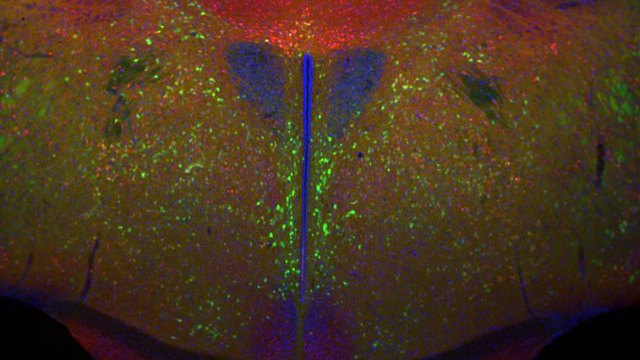 Hypothalamus of a transgenic mouseWIKIMEDIA, NATIONAL INSTITUTES OF HEALTHDuring adulthood, the mouse brain manufactures new neurons in several locations, including the hippocampus and the subventricular zone of the forebrain. The hypothalamus, previously identified as an area with an important role in aging, also generates new neurons from neural stem cells. In a study published today (July 26) in Nature, Dongsheng Cai and his team at the Albert Einstein College of Medicine in New York connect the dots between these two observations, reporting that hypothalamic neural stem cells have widespread effects on the rate of aging in mice

In what David Sinclair, who studies aging at Harvard Medical School and who was not involved in the work, calls a “Herculean effort,” the researchers “discovered that stem cells in the hypothalamus of the mouse play a role in overall health and life span,” he tells The Scientist....

“If this is true for humans, one could imagine a day when we are treated with these small RNAs injected into our bodies or even implanted with new hypothalamic stem cells to keep us younger for longer,” Sinclair adds.

Researchers who study aging have long been searching for a central location that controls the process system-wide. In a 2013 paper, Cai and his team reported aging-associated inflammation in the hypothalamus of the mouse, which they could experimentally manipulate to speed up or slow down various types of aging-related decline, from muscle endurance to cognitive skills.

This study, Cai says, suggested the hypothalamus might be that central locus in control of aging. The researchers wanted to understand more about how this region of the brain drives aging and what role hypothalamic neural stem cells might play in that process, so they undertook a series of experiments.

The researchers first confirmed that cells bearing protein markers of neural stem cells (Sox2 and Bmi1) were present in the hypothalamus of early-to-middle-aged mice (11 to 16 months old) and that the number of those cells decreased in older mice.

Next, they destroyed neuronal stem cells in the hypothalamus by injecting the third ventricle, adjacent to the hypothalamic region where the stem cells are found, with a lentivirus that converted an administered compound into a toxin in cells expressing the stem-cell marker Sox2. Three or four months later, the researchers compared a variety of aging-related measures, including muscle endurance, coordination, social behaviors, novel object recognition, and cognitive performance, between mice injected with the virus and various control groups of mice that received a brain injection of some sort but in which the toxin could not be produced and the hypothalamic stem cells were consequently not ablated.

“What’s cool about this study is that they specifically delete a population of cells in the hypothalamus of the brain . . . and they show pretty striking alterations in whole-body aging,” says Anna Molofsky, a psychiatrist at the University of California, San Francisco, who studies glial cells and whose graduate work focused on neuronal stem cells and aging. “That’s really showing that there’s a mechanism within the brain that’s regulating whole-body organismal aging,” she adds. Molofsky, who was not involved in the work, says that these results support the idea of the hypothalamus as a central regulator of aging.

Although neural stem cells are known for their ability to produce new neurons, that doesn’t seem to be their primary method for protecting against aging. The anti-aging effects of these hypothalamic stem cells were visible at around four months—not long enough, the authors write, for significant adult neurogenesis to have taken place.

The authors looked instead for some other factor that might be responsible for the stem cells’ effects. In the hypothalamic neural stem cells, the researchers detected exosomes—secreted vesicles that can contain RNA and proteins—containing a variety of miRNAs, short RNA molecules that inhibit the expression of targeted genes. These exosomes were not present in non-stem cells of the hypothalamus.

Cai says microRNAs could be a potential mechanism by which hypothalamic neural stem cells have such wide-ranging effects on aging, yet he believes that neurogenesis may also be involved.

Regardless of the mechanism, Molofsky says, “the medical applications could be pretty profound.” The phenotypes, such as muscle mass and skin thickness, affected by these stem cells are the same ones that cause age-related disease, she notes. “The fact that you can reverse that with a brain-specific modulation, potentially, in a cell type that one could pharmacologically target, I think potentially that could be very profound, assuming that the mouse work translates to humans.”