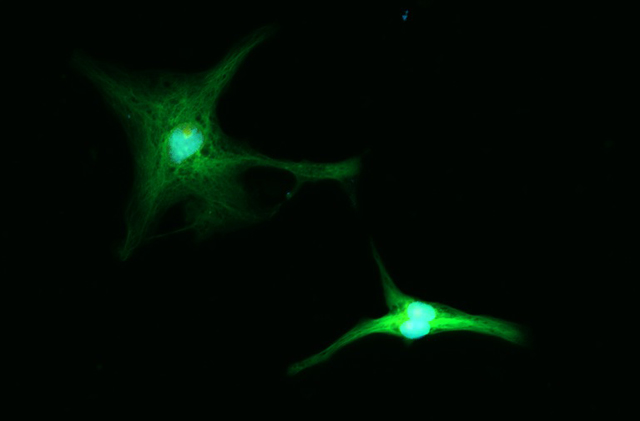 “This paper demonstrates the ability of CRISPR effectors to go beyond turning on a single gene and completely rewire the transcriptional state of the cell,” Neville Sanjana, a bioengineer at the New York Genome Institute who did not participate in the study, writes in an email to The Scientist.

To generate induced pluripotent stem cells (IPSCs), researchers have traditionally overexpressed the genes for four transcription factors: Oct4, Sox2, Klf4, and c-Myc. But in the new study, researchers made iPSCs from mouse embryonic fibroblasts by using an epigenetic CRISPR technique to switch on an endogenous copy of just one transcription factor—either Sox2 or Oct4.

Sheng Ding, a stem cell biologist at the Gladstone Institute...

“Our initial idea was to endogenously activate those genes all together,” Ding says. “Then we asked what the limit of this approach is. If we just activate a single gene [or] a single location, would that be sufficient?”

To answer this question, Ding’s team eliminated guide RNAs one at a time. They found that targeting just the Sox2 promoter or the Oct4 enhancer and promoter were sufficient to convert mouse embryonic fibroblasts into iPSCs. The authors also showed that activation of Oct4 using dead Cas9 that recruits a modified version of a histone acetylytransferase could also lead to the conversion of fibroblasts into iPSCs. Both findings demonstrate that manipulating the epigenome can lead to the generation of iPSCs.

At first, Ding didn’t think it would be possible to reprogram cells by activating a single gene at just one location, but now his team has developed a hypothesis as to how it works. “The genome is not organized in a linear fashion. Lots of [genomic] sites are actually bound together in a three-dimensional context,” he explains. “So if you think about this three-dimensional architecture, you can imagine that [a] single site has many nearby locations that could be affected as well.”

The researchers plan to investigate the role that genome interactions could play in reprogramming cells. And they want to improve upon the technique in order to use it to reprogram cells in living organisms and to generate different cell types for use in cell-based therapies.

“In real life, [cells] are impacted by all these other signaling pathways in the natural microenvironment,” says James Dahlman, a bioengineer at Georgia Tech who did not participate in the work. “If you’re going to start with the same cell type and drive it to pluripotency, and then redifferentiate it to get to some other new cell type that you’d like, will this procedure be useful for that? My guess is that the answer’s going to be yes, but there are all these variations that you’re going to have to understand and take into account.”

Dirk Hockemeyer, a cell biologist at the University of California, Berkeley, who was not involved in the study, agrees, explaining that it remains to be seen how generalizable this tool will be to other applications, such as converting fibroblasts to heart cells. “The more tools we develop the better,” he says. “Maybe only a few will be eventually used in the clinic, but it’s very difficult to know which ones those are, so we need to give everything a fair chance. And this is one approach that is very, very promising.”