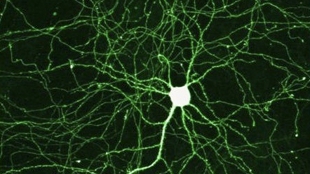 Flickr. MikeBlogs.Neural stem cells transplanted into the brains of people with Pelizaeus-Merzbacher disease (PMD) can differentiate and begin producing the myelin sheaths that these patients lack, according to results of a Phase I clinical trial published today (October 10) in Science Translational Medicine. Myelin, the fatty insulating layer wrapped around nerve axons, is essential for proper nerve signaling. Researchers hope that these stem cell-derived myelin-producing cells may someday help patients recover brain function.

“This is an encouraging first step,” said neurogeneticist Grace Hobson at Nemours Biomedical Research in Delaware, who investigates PMD but did not participate in the research. The disease currently has no treatment, but the new results give hope that stem cell transplantation may one day help restore nerve function in PMD patients, she said.

Myelin, produced by oligodendrocytes in the brain and spinal cord, insulates axons that extend from neuron bodies and signal between different...

One biotech company, Newark, California-based StemCells Inc., has developed a proprietary line of human neural stem cells. Harvested from donated human fetal brain tissue, the neural stem cells are purified based on cell surface markers and expanded before being cryopreserved and banked.  These stem cells can engraft and differentiate into various neural lineages and have been used to help treat spinal cord damage in mouse models.

Using the shiverer mouse model, in which deletions of the myelin basic protein prevent myelination in the central nervous system, the scientists further showed that the transplanted cells could differentiate into oligodendrocytes that generated new myelin sheaths and increased nerve signaling. In fact, more than 50 percent of the cells transplanted in the mouse model differentiated into this cell type—a promising finding for eventual use in humans, said neurogeneticist Brian Popko at the University of Chicago, who was not involved in the study.

The researchers also addressed whether there was a difference between engraftment in asymptomatic neonates mice and juveniles that were already displaying the characteristic tremors, said neurologist and senior author of the mouse paper Stephen Back at Oregon Health and Sciences University (OHSU). It was unclear whether differences in the brains at these developmental stages would affect stem cell differentiation, but the transplants produced myelin in both sets of mice. Hobson found these data particularly encouraging, as they suggest that “treatment with stem cell therapy may be extended to older children,” whose diseases are fairly advanced.

Based on these promising results, StemCells Inc. teamed up with researchers at the University of California, San Francisco (UCSF), to conduct a Phase I trial investigating how patients react to neural stem cell transplants. They chose to evaluate stem cells in patients with PMD, an X-linked disorder wherein mutations prevent oligodendrocytes from producing myelin. Children—primarily boys—with the early-onset form of the disease display profound defects in speaking, walking, and even breathing; many do not live to adolescence. “Because the patients’ own oligodendrocytes are defective, you can’t enhance their own myelination. The logical approach is to consider a stem cell transplant,” explained neonatologist and senior author David Rowitch at UCSF.

Four children with varying degrees of neurological defects, varying in age from 14 months to 5 years, enrolled in the study and received transplants of StemCells Inc.’s neural stem cells in four locations of “white matter”—the bundles of axons that signal between the brain’s “grey” areas, where the neuron bodies lie. All four patients tolerated the transplants well and MRI scans taken for 12 months following the transplants revealed changes consistent with myelination.

Furthermore, although Phase I clinical trials are designed to test safety, not efficacy, the researchers did measure some functional changes in the children. They found modest gains in areas of strength, speech, and following commands. “We are encouraged, and feel the findings indicate the need for further clinical investigation,” said Rowitch, though without a control group to compare to, it is possible that some of these changes may be attributed to child development.

Furthermore, myelin alone may not be enough to rescue cognitive defects, noted Hobson. Without myelin, nerves often degenerate to the point that merely insulating them again cannot restore lost functions. Moses Rodriguez, a neurologist at the Mayo Clinic, expects that combination therapy, which promotes nerve health in addition to providing myelin, may be necessary to promote better functional gains than seen in the current trial.

If the stem cell transplants do ultimately demonstrate benefit, they could help more than just PMD patients, said Back. There’s a wide range of possible myelin disorders that could be targeted, including demyelinating disorders like multiple sclerosis and preterm babies at risk for cerebral palsy due to white matter injury.

In the meantime, Rowitch and his colleagues would like to learn more about the signals that promote differentiation of the stem cells into oligodendrocytes. “In transplants, we could augment the process, degree, and extent of myelination. In other cases, such as multiple sclerosis, we could help augment the repair process” of existing oligodendrocytes, said Rowitch.  “If we understand the mechanism, we get two benefits.”