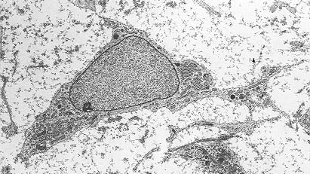 Mesenchymal stem cellWIKIMEDIA, ROBERT M. HUNTPretreating human mesenchymal stem cells (MSCs) with a small molecule called Ro-31-8425, researchers can increase the expression of the surface receptor CD11a to improve the cells’ ability to target to inflamed tissue, according to a study published today (February 26) in Cell Reports. Such improved homing of MSCs could improve the efficacy of the more than 400 MSC-based treatments currently in clinical trials.

“Generally speaking, MSCs do have great potential for tissue regeneration,” said Sophia Khaldoyanidi, a stem-cell biologist at the Torrey Pines Institute for Molecular Studies in San Diego, California, who was not involved in the work. “Unfortunately, the majority of clinical trials did not reach their full potential. In my opinion, this is mostly due to the fact that we didn’t learn everything about the basic biology of these cells, and we rushed quickly to clinical trials. The current...

Bioengineer Jeffrey Karp of Brigham and Women’s Hospital and Harvard Medical School and his colleagues first needed to select an appropriate molecular receptor for their MSCs to express. They chose CD11a because it interacts with the surface molecule ICAM-1, which is expressed in blood vessels at sites of inflammation. “It’s a universal endothelial cell signature at a site of inflammation,” Karp said. Damaged tissue that MSC therapies aim to repair is often accompanied by inflammatory responses, and many trials are now taking advantage of the natural immunomodulatory properties of MSCs to reduce inflammation, Karp explained. Many investigators are now “using [these] stem cells for non-stem-cell proprieties,” he said. “[It’s] really just a cell-based steroid, if you will, without the side effect.”

To find a treatment regimen that would increase the expression of CD11a on the MSC surface, the researchers teamed up with Sanofi to screen some 9,000 small molecules. Using an antibody-based test to measure surface expression of CD11a, the team selected half a dozen compounds for further testing. The researchers then subjected cells pretreated with these small molecules to a secondary screen in a flow chamber with ICAM-1 coated on the chamber surface. This narrowed the field to one promising molecule: the kinase inhibitor Ro-31-8425.

“[This was] an important additional step,” Khaldoyanidi said, to ensure that the MSCs survive and adhere to the target molecule under shear stress conditions. “Once cells are in blood circulation, the whole biology is changing: under flow, [they] have to exit circulation.”

Finally, the team collaborated with Charles Lin at Massachusetts General Hospital to test its Ro-31-8425-pretreated MSCs in mice. After injecting lipopolysaccharide into one ear and saline into the other, the researchers infused the pretreated MSCs into the animals’ bloodstreams. Because ear tissue is relatively thin, the researchers simply rested the mice’s ears on the stage of a powerful fluorescent microscope and imaged the tissue at single-cell resolution. Not only could they see that the MSCs had preferentially homed to the inflamed ear, they could clearly see that the cells had exited the blood vessels and entered the tissue.

“[We saw] on the order of 70 percent increase in homing with this system,” Karp said. “This was by far the best we had seen.” Most importantly, the researchers documented a significant decrease in inflammation, with the pretreated MSCs resulting in a three- to four-times reduction in ear thickness, a measure of swelling.

“Conceptually, it’s an interesting approach,” Khaldoyanidi said. “Because once you know the molecular profile of this particular disease, then you can set a screening to see if you can regulate [surface] ligands so you can have interactions [with receptors] that are present in [the] particular tissue [of interest]. . . . This is exactly why we need to better understand the biology of disease which we want to treat with mesenchymal stem cells.”

Karp said his team is now working to apply its approach to a therapeutically relevant area. “We’re moving full speed ahead trying to demonstrate efficacy in an application that would be very meaningful to patients.”