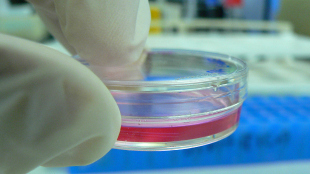 WIKIMEDIA, KAIBARA87Stem cells grown on hard or soft substrates seem to note the difference, and memory of their past environments can influence their later fates. Researchers demonstrate today (March 16) in Nature Materials that human mesenchymal stem cells grown on a rigid substrate for some time become biased toward differentiating into a bone-cell lineage, whereas cells grown on softer surfaces are just as likely to eventually follow a bone- or fat-cell fate.

Key to these experiments was a phototunable hydrogel that allowed the researchers to alter the stiffness of the substrate simply by shining a light. “The report is a really great illustration of the potential to use materials as tools to understand how stem cells work,” said Matthew Dalby, a bone cell engineering researcher at the University of Glasgow who was not involved in the study.

Earlier work has shown that stem cells respond to their physical...

Earlier work has shown that stem cells respond to their physical environments, and studies have implicated the transcriptional coactivators YAP and TAZ in transducing this mechanical information from the environment to the cell. For the present study, Kristi Anseth at the University of Colorado, Boulder, and her colleagues examined whether stem cells “remember” past environments and how this retention could influence their fates.

In a set of experiments that involved first culturing cells on a stiff polystyrene surface and then transferring them to a soft hydrogel, the researchers found that the longer the cells grew on the stiff substrate, the greater the expression of RUNX2, a pre-osteogenic transcription factor. To see whether this translated into a bias toward a bone-cell fate, they compared stem cells grown on a soft surface to cells grown on a stiff surface. Both populations of cells were cultured in adipogenic and osteogenic media. Those in the soft environment showed signs of pursuing either fat- or bone-cell lineages. In contrast, cells that spent a longer time on the firm surface before being transferred to the softer one showed a greater tendency toward an osteogenic fate.

“It was an interesting study that shows some correlations between the stiffness of gels to which these human mesenchymal stem cells were adhered and certain markers of cell commitment,” said Krystyn Van Vliet, who studies material chemomechanics at MIT and who did not participate in the research.

The cells appeared to remember their past experiences on the stiff substrate. In another group of experiments, Anseth’s team grew stem cells on the phototunable hydrogel and “dosed” the cells with various days of growth on a stiff gel. Upon shining UV light, the hydrogel softens, allowing the researchers to change the stiffness of the substrate without having to detach and transfer the cells to a new environment. They found that when cells lived on a stiff substrate for just one day, RUNX2 “deactivated” and relocated from the nucleus to the cytoplasm upon the cells’ return to growing on a soft surface. However, if the cells spent 10 days on the stiff substrate, RUNX2 remained activated in the nucleus for 10 days after the cells transitioned to the soft substrate.

Anseth’s results were similar when she looked at the activation of YAP. More time spent on the hard substrate translated to an extended period of YAP activation once the cells were grown on a soft surface—a memory of the cells’ mechanical history. “It’s as if cells remember . . . this type of physical input,” said Stefano Piccolo, who studies mechanotransduction at the University of Padova in Italy. Piccolo added that it would be interesting to see whether that memory can be erased or controlled by manipulating YAP.

“These findings, that cells respond to mechanical dosing and possess a mechanical memory, deepen our basic understanding of cellular mechanotransduction,” the authors wrote in their paper.

Chun Yang, a graduate student in Anseth’s lab and the lead author of the study, told The Scientist that her team’s findings also have practical implications. “If an in vitro culture process will induce some activation of cells unintentionally . . . they may not behave like what [researchers have] hypothesized,” she said. “This definitely adds to our understanding of how we should culture stem cells in vitro.”

Van Vliet pointed out that the changes in RUNX2, YAP, and others correlated with time spent on the stiff material, but such associations don’t necessary pin down the cause of those alterations. Anseth’s group referred to YAP as a “mechanical rheostat.”

“Biologically, the question is what prevents YAP/TAZ and hence RUNX2 nuclear expression [from] falling once moving to a softer environment, and this may be related to epigenetic checkpoints,” Dalby wrote in an e-mail to The Scientist. Piccolo agreed that chromatin modifications likely explain how cells form a mechanical memory, but noted that this has yet to be shown.

“I think part of their method that was particularly useful in answering their questions is changing the gel stiffness on the fly,” Van Vliet told The Scientist. “Without that they couldn’t have achieved these same conclusions,” Piccolo told The Scientist. “This technological improvement has been instrumental in revealing” stem cells’ memories of their physical environments.