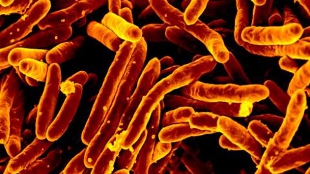 WIKIMEDIA, NIAIDMycobacterium tuberculosis (TB) hides out in stem cells deep within bone tissue, where it avoids detection from the immune system and drugs, according to a study published last week (January 30) in Science Translational Medicine.

“This is a very exciting story,” said Horacio Frydman, a microbiologist at Boston University who was not involved in the research. In 2006, Frydman and his Princeton University postdoc advisor, Nobel Laureate Eric Wieschaus, reported the first case of bacteria living in a stem cell niche, after observing Wolbachia invade the stem cells of the Drosophila melanogaster germline. "Hitching a ride in cells that are self-renewing is a great strategy for reinfecting tissues in the host”, continued Frydman, “and we always assumed that other bacteria should also be doing the same.”

Ninety percent of TB infections are cleared by the body’s immune defenses or by taking anti-TB medication. In the remaining...

During the early stages of the disease, active TB bacteria replicate inside human macrophages and dendritic cells. But there is no evidence these cells harbor dormant TB, and the location of the latent reservoir has remained a mystery.

Bikul Das, the study’s first author and a postdoc at Stanford University, first stumbled across a possible reservoir 15 years ago, while working for the World Health Organization (WHO) in the Himalayan country of Bhutan, where TB is severely endemic. While conducting bone marrow biopsies of patients with unexplained pyrexia, or fever, Das became curious as to whether TB could inhabit the bone marrow. Given that active TB can sometimes circulate in the bloodstream, he reasoned, perhaps the bacterium also infects the bone marrow, which is highly vascularized. Sure enough, when he examined surplus biopsy material, Das detected a surprising number of patients that harbored TB in their bone marrow.

Interestingly, much of the TB was observed in progenitor cells, suggesting TB might target bone marrow stem cells, but Das’s tenure in Bhutan ended before he could further explore the finding. Then, 4 years ago, he joined the Stanford University lab of Dean Felsher to revisit the topic. Das and Felsher started by collecting the bone marrow of healthy human volunteers, and exposing the cells in culture to virulent or avirulent strains of TB. The cultures were then treated with an antibiotic to kill any bacteria that hadn’t entered the cells.

Four days later, a subset of bone marrow mesenchymal stem cells (BM-MSCs)—those that expressed the cell surface receptor CD271—carried a remarkably heavy load of TB bacteria. In a follow-up experiment, the researchers tagged TB with a fluorescent marker and watched as the bacteria preferentially infected CD271-positive BM-MSCs. They also checked whether the bacteria could establish latent infections, and found that TB harvested from BM-MSCs up to 2 weeks after initial exposure could successfully grow active cultures.

To confirm the results, Das used a mouse model developed by Antonio Campos-Neto at the Forsyth Institute, where rodents are infected with a genetically modified TB strain whose replication can be switched off after 3 weeks without killing the bacteria. Six months later, Das uncovered viable, nonreplicating TB in the animals’ BM-MSCs. Transferring infected BM-MSCs into tail veins of naïve mice developed severe lung infections, which is indicative of a latent infection in mouse BM-MSCs

Felsher believes that TB might select this hideout because “MSCs express genes that spit out a broad spectrum of drugs,” such that the bacteria would be sheltered from their anti-microbial activity. These stem cells also reside in an immunoprivileged niche within the bone marrow, where multiple mechanisms cooperate to prevent immune attack, such as an elevated density of immunosuppressive Treg cells and higher expression anti-inflammatory molecules.

Interestingly, the researchers found that differentiated BM-MSCs were less supportive of TB infection, with bacterial viability reduced four-fold, as measured by colony-forming assays. These findings raise the question: Does TB compel BM-MSCs to retain their stem cell properties? A recent study in Cell showed that Mycobacterium leprae—the agent of leprosy—reprograms Schwann cells so they adopt stem-cell like properties, which promotes infection.

Finally, the investigators returned to an endemic TB region—Arunachal Pradesh, India—to collect human bone marrow from nine patients who had contracted TB, but had been successfully treated with “DOTS”—a WHO-endorsed, multistep therapy. The researchers isolated CD271-positive BM-MSCs with magnetic sorting, and found that these cells were positive for TB DNA in 8 of the 9 patients. Furthermore, two of the TB-positive bone marrow samples yielded viable bacteria.

While previous studies have detected TB DNA in other cell types, including epithelial/endothelial, fibrocytes, adipocytes, this is the first demonstration of viable TB being isolated from patients with latent infection.

“It’s worth studying how TB gets into mesenchymal stem cells because, in theory, blocking [this interaction] might be a way of reducing dormancy and reoccurrence,” said Felsher.