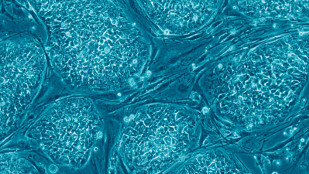 Human embryonic stem cellsWIKIMEDIA, NISSIM BEVENISTYDifferent cell culture conditions can impact genetic changes in human embryonic stem cells (ESCs), and these changes could affect the cells’ clinical utility, according to a study published in PLOS ONE today (February 25). Researchers from the Scripps Research Institute in La Jolla, California, and their colleagues have found that, overall, the fewest genetic changes arise in ESCs that are grown on a substrate layer of “feeder cells”—non-dividing cells that provide nutrients and help ESCs attach to their culture dishes—and passaged mechanically, that is, broken into clumps before being moved into new vessels. The researchers found that the most genetic variation arises in ESCs grown without feeder cells and passaged using an enzyme that dissociates them from a mass of tissue into single cells. Some of the observed genetic changes may even contribute to cancer, the researchers reported.

“The study is important in...

The take-home message, study coauthor Jeanne Loring of Scripps told The Scientist, is that researchers should monitor their cells. “This is like a mantra for me; it’s like a soap box. I’m trying to get other people in the field to closely examine their cells before they do anything else with them,” she said.

It’s long been known that ESCs undergo genetic changes in culture. It was also known that some of these differences made the cells more likely to become cancerous. There had also been hints that certain culturing methods were associated with these changes, but the results were not conclusive.

The researchers took a single sample of human ESCs and split it into four parts, culturing each under different conditions, varying both the cellular substrate lining the culture dish (feeder cells or an extracellular matrix layer) and passaging method (mechanical or enzymatic), and observed how the cultures diverged genetically over time and passaging.

They found that more genetic changes tended to develop in cells that were enzymatically passaged than in those that were passaged mechanically. “Exposure to the enzyme seemed to be the biggest factor in making the cells less stable,” said study coauthor Louise Laurent of the University of California, San Diego. The cellular substrate also had some effect, with cells grown on feeder layers developing fewer genetic changes.

Notably, Loring, Laurent, and their colleagues found that deletions in the tumor suppressor gene TP53, located on human chromosome 17, cropped up in all experimental groups except those grown on feeder cells and passaged mechanically. TP53 deletions had not been previously reported in ESC lines, Laurent noted. Additionally, after culturing, duplications in regions already associated with both cancer development and cell proliferation appeared on chromosomes 20 and 12.

The observed genetic changes arise through natural selection, said Loring. “A culture dish is like a Darwinian environment. In other words, there’s . . . survival of the fittest,” she explained. Enzymatic passaging puts selective pressure on the cells, the researchers hypothesize, because it forces them to grow as individuals, which is not ideal for ESCs.

Are cells that grow better in culture also those more likely to form cancers? “That would be the inference,” said Pera. “All of these genes, we know from past experience . . . confer some proliferative or survival advantage to pluripotent cells.” This survival advantage will only cause the mutant cells to flourish under selective pressure, he added. With mechanical passaging, a process that most cells survive, populations of cells with these cancer-predisposing genetic variants may not rise to notable levels because the other cells are not being weeded out.  On the other hand, “if you’re constantly disassociating the single cells, where a lot of cells are going to die, then cells with these lesions have an advantage, and they’ll outgrow normal cells,” said Pera.

“The challenge . . . is to develop methodologies that will allow you to grow these cells in large numbers and maintain genetic stability of the cells,” said Peter Andrews, a stem-cell scientist at the University of Sheffield, U.K., who was not involved in the work. “That’s the challenge, and so this is a contribution to understanding [the issues] but it doesn’t actually solve the problem.”