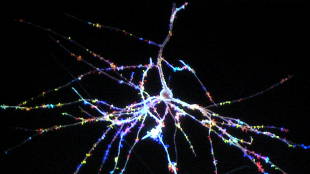 FLICKR, STEVE JURVETSONUsing a modified scorpion neurotoxin or antibodies to target gold nanoparticles to the surface of neurons, researchers have created a new way to stimulate brain cells in culture. All it takes is a little bit of light to heat the particles, which changes the capacitance of the membrane, resulting in the depolarization of the cell and the firing of an action potential.

“We call it optogenetics without the genetics,” said biophysicist Francisco “Pancho” Bezanilla of the University of Chicago, “exciting cells in the nervous system without going through all the difficulty of creating a transgenic animal. . . . It’s a shortcut.”

Bezanilla launched the project after chatting with vision neuroscientist David Pepperberg of the University of Illinois at Chicago at a conference a few years back focused on solutions to restore vision in patients suffering from macular degeneration, in which the photoreceptors have degenerated but the...

With their colleagues, Bezanilla and Pepperberg coupled gold nanoparticles to a synthetic version of the scorpion neurotoxin Ts1, which binds neuronal sodium channels, or to antibodies that bind the neuronal ion channels TRPV1 and P2X3, then treated cultured dorsal root ganglion neurons with the particles before subjecting the cultures to pulses of light. Sure enough, the heating of the nanoparticles triggered action potentials, and the channel-targeting molecules held the nanoparticles in place, even when the cultures were continuously washed for 30 minutes. The technique also proved successful in slices of mouse hippocampus.

“It’s an exciting new technique and certainly could have lots of applications,” said Michael Sasner, a mouse model expert at the Jackson Laboratory in Bar Harbor, Maine, who was not involved in the study. While the new strategy has yet to prove its utility in vivo, it could serve “as a kind of first pass,” he said. “You have the huge variety of antibodies available to conjugate a gold nanoparticle to; you could very quickly and relatively easily study stimulation in a hippocampal slice, for example.”

Bezanilla and Pepperberg noted that the technique may be tunable, if researchers simply couple the targeting molecules to differently shaped gold nanorods that absorb different wavelengths of light, including in the near-infrared spectrum. “It has some flexibility in that regard,” Bezanilla said.

Before translating the approach for biomedical applications, “much work needs to be done to test this in our animal systems for long term biocompatibility,” Pepperberg said. But he is hopeful that the group’s original inspiration for the project—using the nanoparticle-stimulated neural activity to restore vision—could work where optogenetics cannot.

“Indeed, when you’re thinking translating this technology to medical applications, people are very afraid to use genetics in humans, so that’s a criticism of optogenetics,” said Thomas Knöpfel, chair of Optogenetics and Circuit Neurosciences at Imperial College London who was not involved in the work. However, Knöpfel voiced concerns about using nanoparticles as a therapeutic substitute. “[Personally], I’d rather being exposed to some virus than somebody shooting gold particles in my brain.”

Another limitation of the nanoparticle technique so far is that it can only excite neurons, not inhibit them as optogenetics can. And because a given antibody may be expressed on different neuronal subtypes, the cell population that gets excited may be heterogeneous.

“Like any technique, it has its limitation and advantages,” said Pepperberg, “but we think the advantages here are very exciting.”