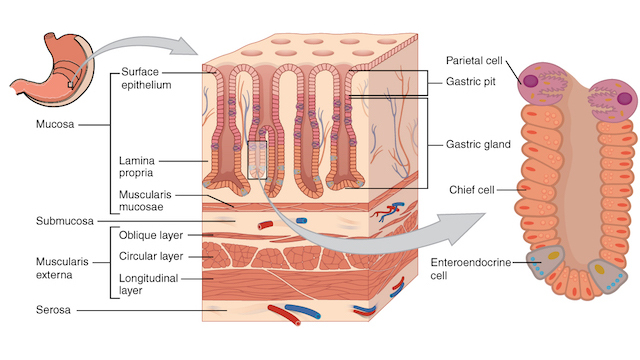 WIKIMEDIA, OPENSTAX COLLEGEIn healthy individuals, chief cells, which are found at the base of corpus glands in the stomach, act as producers of digestive enzymes. However, if the gut undergoes damage or genetic mutation, these cells have the ability to convert into stem cells that can lead to gastric cancer, according to a study published last week (June 5) in Nature Cell Biology.

“This is the first definitive demonstration that that a subset of chief cells is cancer prone and can serve as the origin of gastric cancer,” says study coauthor Nick Barker, who studies cancer and stem cells at A*STAR Institute of Medical Biology (IMB) in Singapore.

Still, the identity of gastric-cancer forming cells has been controversial, and not all researchers are convinced Barker’s study has resolved the debate.

A long-standing theory in gastroenterology is that stem cells in the stomach arise in the isthmus, the...

In recent years, however, a new hypothesis has emerged. Based on the observation of spasmolytic polypeptide-expressing metaplasia (SPEM), James Goldenring at Vanderbilt University and colleagues proposed that this specific type of metaplasia in the stomach arises from chief cells that converted (or “transdifferentiated”) into a different cell type. “It’s very difficult to see it happening, and people have questioned whether this is really happening in humans,” Barker says. “It's controversial.”

For example, in 2015, a group of researchers led by Timothy Wang, a gastroenterologist at Columbia University reported that when they used a diphtheria toxin to kill off chief cells in the stomachs of mice, mutations to the remaining cells still gave rise to metaplasia and cancer. “His conclusion was that . . . chief cells cannot be the cell-of-origin of that cancer,” Barker says.

To further address this question, Barker and colleagues created a mouse model in which they discovered Lgr5, a gene typically expressed in adult stem cells across various tissues, selectively labelled only a subset of chief cells (around 40 percent). This calls into question the conclusions of Wang’s study, Barker says, because that experiment only ablated chief cells expressing Lgr5, meaning others were left intact, making it impossible to come to the conclusion that chief cells did not give rise to metaplasia.

Through additional experiments, Barker’s team discovered that these Lgr5-labelled chief cells could give rise to cell regeneration when exposed to injury. In addition, when the researchers introduced mutations associated with gastric cancer, these chief-cells-turned-stem-cells led to metaplasia. “Under normal conditions, these cells behave as differentiated chief cells, whereas if you damage the tissue, they are activated and they function as stem cells,” says study coauthor Marc Leushacke, a research scientist at the IMB.

“I wasn’t surprised by the finding because they basically support everything that we've found for the last 15 years,” Goldenring, who did not take part in this study, tells The Scientist. “This gets us back to the point of recognizing that chief cells are the origins of SPEM.”

Wang, however, is not convinced. More data are needed to definitively say the chief cell hypothesis is true, he says. For example, it is important to investigate the entire gland, not just the bottom (in the chief cell zone), to prove that the stem cells don't come from higher up in the glands, such as in the isthmus zone, where stem cells are typically located. He adds that it would be useful to see a more detailed time course of the process, along with markers to clarify where the regeneration is predominantly originating from. Ablation studies would also be useful, where either the isthmus stem cells or chief cells are blocked, and then re-investigate if the effects still occur.

Others take pause with the authors’ claim that their study shows that gastric cancer originates from chief cells. “They claim that this is a cell-of-origin of gastric cancer, but there’s no gastric cancer in this paper at all,” says Stuart McDonald, a stem cell biologist at Barts Cancer Institute in the U.K. who was not involved in the study. “So the model they use, it forms a metaplasia, but as far as I know, they don't go to cancer."

Goldenring says that a definitive link between metaplasia in the stomach and gastric cancer is still lacking in both animal and human studies. One of the reasons for this, he adds, is that researchers have yet to come up with a true model of gastric cancer in mice.

Settling this debate could have important implications for both the prevention and treatment of cancer. For example, Barker says, if scientists can be sure that chief cells are the cell-of-origin for gastric cancer, they can try to elucidate the mechanisms that lead to cancer, and potentially stop those from happening in people who are more likely to develop it. In addition, Wang says, “we think that the stem cells are expanded, early on, by carcinogenic injury, and this is potentially an early biomarker for gastric cancer risk, for example.”

Researchers agree that this debate is far from over, and that more work is needed to fully understand how gastric cancer arises. “I think the paper serves a purpose in that it helps to drive interest in the stem cell biology in the stomach,” McDonald says, “because we’re clearly just at the beginning of understanding what’s going on.”