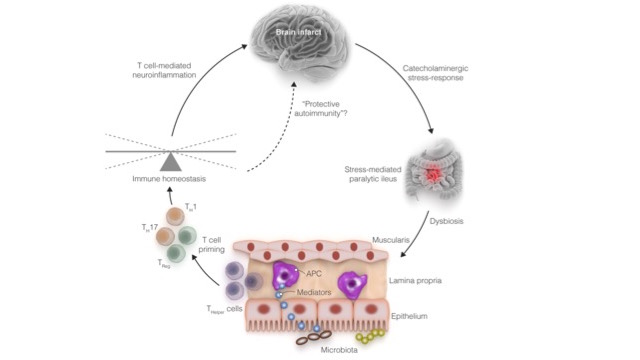 Schematic showing how stroke alters gut microbiota, which primes the immune system to exert further damageARTHUR LIESZScientists are finding increasing evidence that the stomach and the brain are linked via microbes and the immune system. Researchers from the Ludwig Maximilian University of Munich in Germany have found that inducing strokes in mice altered the animals’ gut microbiota, triggering an immune response that traveled back to the brain and worsened the severity of the lesions. When the researchers transplanted fecal bacteria from healthy mice into germ-free rodents that had suffered strokes, the latter animals made a better recovery than mice that didn’t receive the healthy bacteria, the researchers reported this week (July 12) in The Journal of Neuroscience.

“It’s a very nice study,” neuroscientist Josef Anrather of Weill Cornell Medical College in New York City, who was not involved in the research, told The Scientist. The authors show...

Research has shown that ischemic strokes produce an inflammatory response in the brain, which activates lymphocytes—particularly T cells. Depending on their fate, these T cells can help or worsen the brain’s recovery. Accumulating evidence now suggests that microbes in the gut can influence immune activity in the brain via the so-called “gut-brain axis.” Anrather and colleagues published a study in March showing that antibiotic-induced changes in gut microbiota affected the outcome of stroke, but the opposite effect—how stroke impacts the gut microbiome—had not been investigated until now.

In the present study, Arthur Liesz of the University of Munich and colleagues induced strokes in the brains of anesthetized mice by blocking the animals’ middle cerebral arteries. When they sequenced the rodents’ gut microbiota three days later, they found a noticeable drop in the diversity of bacterial species present, combined with overgrowth of bacteria in the phylum Bacteroidetes.

“What we observed is that after a stroke, particularly when there is a large brain injury . . . we have changes in the gut microbiota,” Liesz told The Scientist.

Consistent with previous studies, Liesz’s team found that the animals’ gut motility was notably reduced following their strokes. Together, the findings suggest that by slowing the movement of stomach contents, stroke alters the microbial makeup of the gut. But could these microbial changes in turn affect the brain’s recovery from stroke, Liesz’s team wondered?

To find out, the researchers transplanted fecal microbiota from mice that had suffered strokes into the guts of germ-free mice, and then induced strokes in the latter group of animals. The animals that received transplanted microbiota from the brain-injured mice had significantly larger stroke infarct volumes compared with mice that received sham transplants, the researchers found. In addition, the mice that received transplants from the post-stroke mice also had higher expression of the inflammatory T cells Th1 and Th17. When the researchers fluorescently labeled immune tissue in the intestines of mice after the animals suffered strokes, they found that T cells in the animals’ guts migrated to the brain two to three days after the stroke, where they exacerbated the brain injury.

To see whether gut microbiota could limit brain damage from stroke, Liesz’s team performed fecal transplants from healthy mice into animals that had just suffered strokes, which resulted in smaller brain lesions, the researchers found. This finding was linked with an increased in the number of regulatory T cells, which help protect the brain from injury.

“The reciprocal relationship of brain function in regulating the gut and the gut microenvironment influencing brain function through effects of the microbiota is fascinating, particularly if it involves T cells performing different roles,” immunologist Dan Littman of New York University School of Medicine, who was not involved in the study, wrote in an email to The Scientist. “Follow-up experiments are needed to determine whether gut microbes exert these effects through pro-inflammatory versus anti-inflammatory T cells,” he added.

The study provides proof of concept, Liesz said. In future work, he and his colleagues hope to better understand the mechanism of bacterial interaction with the immune system, and determine which bacterial species have the largest impact.

“The next step is to characterize changes in the human microbiome after stroke,” he added.