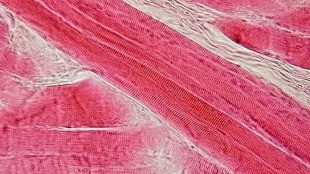 WIKIMEDIA, DEPARTMENT OF HISTOLOGY, JAGIELLONIAN UNIVERSITY MEDICAL COLLEGEA protein implicated in rejuvenating the muscles of older mice now appears to do just the opposite. Researchers reported in Cell Metabolism today (May 19) that, contrary to the results of a 2014 study, GDF11 levels increase with age and inhibit muscle regeneration.

“Both studies are valid. I don’t think one paper is obliterating the other,” said Fabio Demontis, who studies skeletal muscle aging at St. Jude Children’s Research Hospital and was not involved in either study. “The new study indicates that GDF11 is not promoting regeneration in all cases. Differences in experimental settings may explain the differences in the results between the studies.”

David Glass, the executive director of the Musculoskeletal Disease team at Novartis Institutes for Biomedical Research who led the new study, said he couldn’t speculate as to the cause of the discrepancy. “I can just say...

Some have called GDF11 a “fountain of youth,” noting it is capable of reversing some aging-related physiologic declines. Much of this stems from studies by Amy Wagers and Richard Lee’s groups at Harvard. In one, published in Cell in 2013, Wagers, Lee, and their colleagues showed that sewing together the circulatory systems of young and old mice via a method called heterochronic parabiosis remodeled the older animal’s heart to a more youthful state. It appeared that GDF11 was responsible for the effect; giving the aged animals GDF11 alone had the same impact.

A year later, the team followed up in Science, showing that giving old mice GDF11 also restored muscle function. Published alongside it, another paper from some of the same researchers showed that GDF11 could boost neurogenesis and blood vessel development in the brains of older mice.

While the results generated considerable excitement, the effects of GDF11 were curious, given that the protein is so similar in form and function to myostatin, which inhibits muscle differentiation. In 2009, Glass’s team showed that GDF11 could inhibit muscle growth, and Novartis has been developing an antibody in clinical trials that blocks the receptor of GDF11 and myostatin to improve muscle growth in people with muscle loss. “We couldn’t understand how a factor, which we understood to inhibit muscle differentiation, could improve muscle regeneration,” Glass told The Scientist. “So we decided just to check it out.”

The first thing Glass’s team found was that the assay previously used to detect GDF11 wasn’t specific; it picked up both the monomer and dimer forms of the molecule as well as myostatin. So the researchers applied a more specific immunoassay to measure GDF11 levels as animals aged. Levels were too low to detect the protein in mice, but in rats and humans, the team did not see declines as had been reported. “If anything, there’s an increase,” said Glass. RNA-seq performed on rat muscle also showed an increase in GDF11 in older animals.

Further, Glass and his colleagues found that injecting GDF11 into mouse muscle had no impact on the regenerative ability of the tissue when injured. “From a mechanism point-of-view, it just made sense,” Glass said of his results.

“While at first glance their data appear to conflict with ours, we believe that, in addition to substantial methodological differences in their study (including use of a much more toxic and variable injury paradigm and different concentrations of GDF11 protein, among others), there is a very compelling biological explanation for the apparent discrepancies,” Wagers wrote in an e-mail to The Scientist. “We remain convinced that at least one form of GDF11 declines in blood with age and that maintaining GDF11 levels in an appropriate physiological range is essential for muscle health, as shown by us and now also by Novartis.”

Wagers wouldn’t elaborate more on the GDF11 forms she mentioned, but said that more on GDF11 will be published. “We look forward to addressing the differences in the studies with additional data very soon.” Last year, in an interview with MIT Technology Review, she noted GDF11 is not the only factor in the blood responsible for the youthful makeover of old mice given young blood.

As for the methodological differences, Glass said his group used cardiotoxin to injure the mouse muscle rather than cold injury as Wagers’s team had.

The future of GDF11 as a potential therapeutic target will depend on additional data. In the meantime, scientists are experimenting with infusions of plasma from young donors into patients with Alzheimer’s disease.

“The take-home message is to slow down the excitement” over GDF11, said Rita Perlingeiro, who studies skeletal muscle stem cells at the University of Minnesota and did not participate in the studies. “We might need to learn more about it . . . and we have to understand exactly how this works in more detail.”