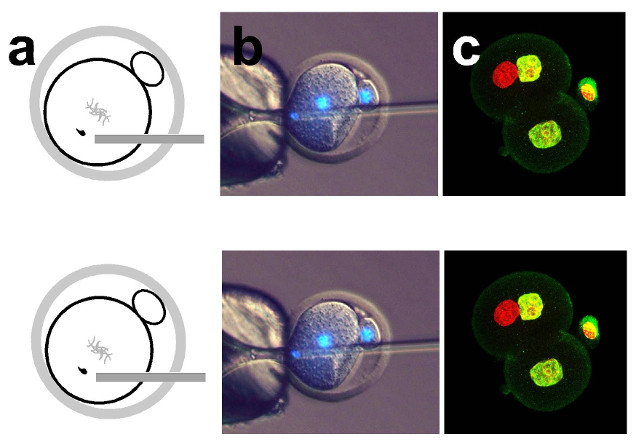 Diagram showing sperm injection into a one-cell embryo in the phICSI method (a); microscopy (with DNA stained blue) of sperm being injected into a one-cell mouse embryo, which has a diameter of about 0.1 mm (b); some of the resulting two-cell embryo cells have a sperm-derived genome (red) and an egg-derived one (yellow), which can develop to form offspring (c)UNIVERSITY OF BATHWhen a sperm fertilizes an egg, it transforms from a fully differentiated cell into half the genetic material of an embryo. This transformation is called reprogramming. For centuries, scientists thought that only eggs could effect this change in sperm, University of Bath biologist Anthony Perry told The Scientist. For the first time, Perry and colleagues have created viable mouse embryos starting not with eggs but with mitotic cells, they reported in a study published today (September 13) in Nature Communications. Many of these embryos developed...

The team “shows that eggs that have already begun embryonic development, and are about to divide from the one-cell to two-cell stage, still retain the ability to ‘remodel’ sperm DNA,” Hugh Clarke, a developmental biologist at McGill University in Montreal who was not involved in the work, told The Scientist in an email. “So this ability is not restricted to eggs at the time of fertilization.”

“This is the first time that anyone has been able to demonstrate that embryos can reprogram a differentiated cell of any kind,” said Perry. The discovery raises the possibility that other mitotic cell types might also be able to reprogram sperm. If so, Perry added, “it might one day mean that we could generate embryos from other cell types—perhaps even somatic cells, perhaps skin cells, for example.”

The researchers started with parthenogenetic embryos: oocytes that had undergone meiosis and were chemically coaxed to begin normal cell division despite not having been fertilized. At about 13 hours after the chemical treatment (the time at which the cell replicates its DNA and prepares for its first cell division), the researchers injected the parthenogenetic oocytes with a sperm (via intracytoplasmic sperm injection, or ICSI), each containing a haploid genome. As the cell cycle progressed, the embryo divided into two cells.

There were several possible ways that the chromosomes could be apportioned between the two cells. The researchers selected the two-cell embryos in which one cell received one set of chromosomes from the parthenogenetic embryo and one from the sperm, as those were the only ones with a chance of survival, Perry said. The researchers then destroyed the second cell. Embryos created this way were called “phICSI”—parthenogenetic, haploid intracytoplasmic sperm injection.

The researchers next implanted a phICSI embryo into a pseudopregnant female mouse. As a control, researchers performed ICSI on oocytes at metaphase II of meiosis, which is when fertilization normally occurs. That fertilization then set the control embryos on course to divide and develop. At the two-cell stage, the researchers destroyed one cell of each ICSI embryo.

The researchers also injected sperm at seven and 10 hours after chemical activation, finding that those embryos were much less viable. Clarke noted that in both metaphase II of meiosis—when ICSI embryos were injected—and in metaphase of the first cell division—when phICSI embryos were injected—the nuclear envelope has broken down so that proteins like histones that live in the nucleus and are necessary for reprogramming sperm spill out and are available to the cells.

In addition to viability, the researchers also examined the way that the chromatin was reprogrammed in phICSI and ICSI embryos. One part of sperm reprogramming is the replacement of the protamine proteins around which most sperm DNA is coiled with histones from the egg. (Protamine makes up most of the protein component of sperm chromatin, which also contains some histones.)

This histone-protamine replacement occurred as usual in phICSI embryos, the researchers reported. But reprogramming also involves other epigenetic changes, and those were different between ICSI and phICSI embryos. For example, levels of H3K9 dimethylation were lower in the maternal chromatin of phICSI embryos, said Perry.

“The offspring in phICSI almost certainly came from embryos where there was these epigenetic differences . . . between ICSI and phICSI,” Perry told The Scientist. “That is, to my mind, really important because it suggests that you can obtain offspring by different epigenetic paths, and that’s the first time, I think, that anyone has said this or suggested this.”

“The fact that normal and fertile mice can develop is surprising, because so many epigenome-level events take place differently in this case than when sperm is injected into an MII [metaphase II] oocyte,” Piroska Szabó, who studies developmental reprogramming at the Van Andel Research Institute in Michigan and who was also not involved in the work, told The Scientist in an email.

In their paper, the researchers wrote that the work “calls into question the argument that parthenogenotes do not have the potential for full-term development.”

Going forward, the researchers intend to investigate this sperm reprogramming machinery and determine whether it is different in oocytes and in parthenogenetic embryos undergoing mitosis, Perry said.