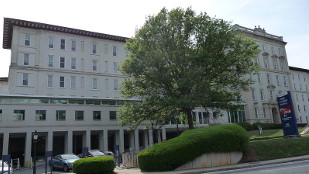 Emory University HospitalWIKIMEDIA, DANIEL MAYEROn a cloudy afternoon in March, immunologist Rafi Ahmed is at work in the basement of the Rollins Research Center at Emory University in Atlanta, just down the street from the US Centers for Disease Control and Prevention (CDC). Months earlier, Ahmed had begun studying immune cells in blood collected from four Ebola survivors treated in Emory University Hospital’s Serious Communicable Diseases Unit last year. He and his colleagues last month (March 9) detailed in PNAS a robust immune response driven by the Ebola virus during and after infection. “It’s truly the first look at what’s happening to B and T cell responses during the acute phase of infection,” Ahmed told The Scientist.

“Anything we learn about pathogenesis is very important,” said Anthony Fauci, director of the National Institute of Allergy and Infectious Diseases (NIAID) who was not involved in the work....

When Ahmed first heard that Ebola patients would be treated at Emory last fall, he immediately contacted the clinical team and the CDC to get patient consent and access to some of the samples. “They were going to do the viral load anyway, so I said let’s do some immunology at the same time,” he said.

While news of the first Ebola patients arriving in the U.S. stirred public alarm, the postdocs in Ahmed’s lab were mobilized into action, working closely with Anita McElroy, an infectious disease specialist with dual appointments at Emory and the CDC. “They were working ’round the clock when the patients were there,” said Ahmed. The sense of urgency continued to build as more patients were admitted to Emory in the following months.

Only McElroy could handle the viremic blood in a biosafety level 4 (BSL-4) unit at the CDC, so members of Ahmed’s lab waited anxiously to analyze each piece of raw data as soon as they were granted access to it. The equipment available in the BSL-4 lab limited the team to measuring just four cellular parameters at a time, but that was enough to make some surprising observations. The Ebola patients’ blood contained unexpectedly large populations of activated adaptive immune cells called B cells and T cells.

“The conventional wisdom is that Ebola is highly immunosuppressive,” said Ahmed. “One of the reasons you have these high levels of viremia is that the immune system can’t kick in.”

But in these four patients, the immune system was kicking in, and in a big way. The most prominent population was the CD8+ T cells, which are known for killing virally infected cells. The researchers also incubated CD8+ T cells with different Ebola proteins and found that the cells responded most strongly to a protein called NP, which Ahmed pointed out is not included in either of the Ebola vaccines currently in human trials.

Nancy Sullivan, chief of biodefense research in at the NIAID, who helped develop one of these vaccines, said she was not surprised that NP generated such a strong response, since it is one of the first proteins made by Ebola during infection, and therefore one of the most abundant. Sullivan said this may also be why a study of blood samples collected during a 1996 Ebola outbreak in Gabon found that survivors tended to make more antibodies against NP than did people who died of the disease. Sullivan noted that vaccination with the Ebola glycoprotein (GP) was enough to protect nonhuman primates from the virus and, in some cases, adding NP to the GP vaccine hindered its effectiveness.

While NP may play a role in natural infection, Sullivan’s team opted to go forward with just GP; the group has shown that its vaccine candidate can induce antibodies and CD8+ T cell responses in humans. Ahmed’s team is interested in comparing the responses generated by vaccines to those induced by natural infection, but he cautioned that his group’s data can’t define which aspects of the immune response may have been responsible for the Emory patients’ recoveries.

The four survivors have agreed to donate blood every six months for three years, so that Ahmed and other researchers can track immunity against the virus over time. This team recently secured a grant from the Defense Advanced Research Projects Agency (DARPA) to do a variety of follow-up studies using convalescent samples, which can be safely handled outside the CDC. Ahmed’s immediate goal is to use the information gathered so far to generate Ebola-neutralizing monoclonal antibodies for therapeutic use. His group will sequence the genes that code for antibodies made in response to GP used them to produce large quantities of the best antibody candidates. A member of the DARPA coalition will then test the candidates in animal models.

Other researchers will use these samples to define the receptors used by B and T cells to detect Ebola and track how immune memory cells are formed. They will also look for epitopes on Ebola proteins that are most likely to activate those memory cells. Though this work could help improve future vaccine designs, much of it will ask basic research questions that have been impossible to explore until now. “This outbreak, as terrible as it is, in the long run will help us understand how the disease progresses in humans,” said Sullivan.