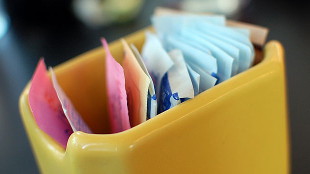 WIKIMEDIA, STEVE SNODGRASSNon-caloric sweeteners can spur glucose intolerance in mice and some people, according to a study published today (September 17) in Nature. Researchers from the Weizmann Institute of Science in Israel and their colleagues have uncovered “the unexpected effect that artificial sweeteners drive changes in the [gut] microbiota, which promote glucose intolerance,” said University of Chicago pathologist Cathryn Nagler, who studies how the microbiota regulate allergic responses to food and penned an editorial accompanying the study.

Immunologist Eran Elinav and computational biologist Eran Segal, both of the Weizmann Institute, identified changes in the composition and function of the mouse gut microbiome after the animals consumed artificial sweeteners—changes similar to those previously linked to obesity and diabetes in humans, the authors noted.

A previous study showed that sucralose can alter the rat gut microbiome—specifically, by decreasing beneficial bacteria—but this latest work pinpoints a microbe-mediated mechanism by...

Elinav and Segal’s team observed that mice given a 10 percent solution of one of three types of commonly consumed commercial artificial sweeteners—saccharin, sucralose, or aspartame—in place of regular drinking water had elevated blood-glucose levels after 11 weeks compared to mice given either a 10 percent glucose solution or water alone. The researchers used saccharin for subsequent experiments as this artificial sweetener showed the most pronounced effect on glucose levels in preliminary trials. Mice fed a high-fat diet plus the 10 percent saccharin solution showed the same effect on glucose metabolism as animals given an even higher saccharin dose—comparable to the US Food and Drug Administration’s (FDA’s) upper limit for safe human consumption.

Four weeks of treatment with gut bacteria-depleting antibiotics reversed the glucose intolerance in mice that continued to receive saccharin. This led the team to examine whether the microbiomes of the mice were somehow altering glucose metabolism. Transplantation of feces from non-antibiotic-treated mice that consumed saccharin- or glucose-containing water into germ-free mice within six days induced the same blood-sugar elevations in animals that were never themselves exposed to the sweeteners.

“This is the elegant and home run experiment that shows causality in mice,” said Nagler.

Using shotgun metagenomic sequencing on the fecal samples, the researchers showed that mice given saccharin or those that received a fecal transplant from saccharin-fed mice had a different microbiome composition compared to mice given sugar or no sweeteners.

In a cohort of 381 non-diabetic volunteers who answered diet questionnaires, those who regularly consumed artificial sweeteners—particularly those who consumed the highest amounts—showed higher fasting glucose levels, poorer glucose tolerance, and different gut microbe profiles compared to those who did not consume such sweeteners. The difference between the two populations remained even after correcting for body mass index.

Further, the team exposed seven young, healthy volunteers who did not have a history of artificial sweetener consumption to one week of the FDA’s maximum acceptable daily saccharin intake, and continuously monitored their glucose levels. Four of the seven volunteers showed a poorer glycemic response at the end of the week compared to their baseline responses. Those who showed no metabolic response to the sweetener had no change in their gut microbiomes, while those who exhibited the worst glycemic responses at the end of the week showed a different gut microbiota profile after sweetener exposure. Fecal transplants from two artificial sweetener-responder volunteers into germ-free mice resulted in a similar gut microbe profile and glucose intolerance as did transplants from saccharin-consuming mice. But the same transplants from two non-responder volunteers had no such effect in germ-free mice.

“The extensive work done with the microbiome [in this study] continues to point to the potential importance of our dietary habits on this previously underappreciated variable in our metabolism,” Christopher Gardner, a professor of medicine at Stanford University who was not involved in the study wrote in an e-mail to The Scientist. Gardner was the former chair of the working group of the American Heart Association that generated a position statement on artificial sweeteners in 2012. He added that while the dose of artificial sweeteners used in this study is acceptable according to the FDA, this high dose—equivalent to 340 milligrams of saccharin (8.5 packets of Sweet N’ Low) per day—is an unlikely dose for the typical artificial sweetener user.

Although the human data provide some evidence that artificial sweeteners may have a detrimental effect on glucose metabolism in a subset of people, the authors cautioned that additional studies are needed to understand who is susceptible to the potential negative effects of artificial sweeteners and to further elucidate the mechanism by which gut microbes may drive metabolic changes.

“I am very excited about these results because they demonstrate the need for more research,” said Pepino. “There are many aspects of these sweeteners that we don’t understand. Artificial sweeteners may have no calories  but mounting evidence indicates that they do have metabolic consequences and may not be the solution for having a sweet taste without the calories.”