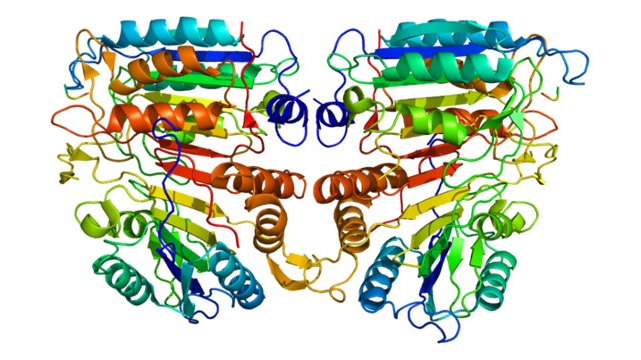 CASP9WIKIMEDIA, EMWOne limitation in the development of cell-based therapies is the growth of tumors that can result from transplantation of pluripotent cells. But in a study published today (March 2) in Stem Cell Reports, researchers in Japan report having successfully used an inducible caspase system to cause apoptosis in tumor cells derived from human induced pluripotent stem cells (iPSCs) transplanted into mice.

“This particular study—and other ones like it—is a really nice example of how . . . looking at the basic questions in science and in biology can lead to things that are very clinically relevant,” Lisa Bouchier-Hayes, who studies Caspase genes at the Baylor College of Medicine in Houston, Texas, and did not participate in the work, told The Scientist. “These first steps are really important,” she said.

“The use of a ‘suicide gene’ in stem cell–derived therapies is certainly an obvious safety...

Endogenous Caspase 9 causes apoptosis when two Caspase 9 molecules dimerize. The researchers took advantage of a previously developed inducible Caspase 9  system, called iCaspase9, in which a chemical that can be administered to cells or injected intraperitoneally in mice causes dimerization and rapid cell death. They used a lentiviral vector to integrate iCaspase9 into the genomes of human iPSCs.

The team then differentiated the iPSCs into neural stem and progenitor cells, and transplanted them into mice with a spinal cord injury. The mice began to recover some motor function, but as neural tumors and teratomas grew from the transplanted cells and pressed on the spinal cord, the rodents began to lose motor function. When the researchers treated the mice with the chemical that activates iCaspase9 dimerization, they could no longer detect transplanted cells, and tumors disappeared. These results suggest that the chemical was able to cross the blood-brain barrier to access cells in the spinal cord.

Demonstrating the feasibility of ablating transplanted cells “is very important . . . for the safety of regenerative therapy or transplantation therapy,” said coauthor Hideyuki Okano of Keio University School of Medicine in Tokyo, Japan. But he added that the iCaspase9 system is not at this time being considered for future clinical applications.

“It’s not ready for clinical use,” agreed Chuanfeng Wu of the NHLBI, who was not involved in the study. Because the ablation is not specific to tumor cells, useful cells could also be ablated, she explained. “It would be nice to use a specific promoter to keep the good ones and only ablate the bad ones.”

Wu also highlighted the need to observe the mice long-term, to determine whether the transplanted cells were truly gone. She said she has seen tumors arise more than five months after ablation, which is a longer timeline than that used in the current study.

“It’s definitely good to have this [system] developed,” said Dunbar, noting that ablation of cells at different stages along the differentiation timeline could be useful in clinical cases in which transplanted cells end up in the wrong place or make the wrong connections. One of the biggest hurdles in developing cell-based therapies, she added, “is figuring out how to get efficient production of adult type cells and getting them to the right place and to hook up the right way.”