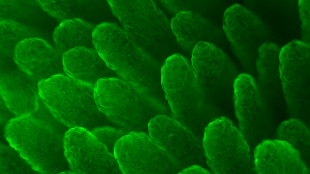 Mouse small intestine villi stained for fucose-attached proteins. JOSEPH PICKARD, UNIVERSITY OF CHICAGOMice with systemic bacterial infections induce a pathway that makes a sugar called fucose readily available to feed the beneficial microbiota in the small intestine, according to a study published today (October 1) in Nature. This newly uncovered protective mechanism helps maintain the “good” bacterial populations in the gut while the animal is sick—and appears to protect against further infections.

“The most interesting aspect of this study is that the host is responding to a systemic microbial infection signal by altering glycans on intestinal epithelial cells, and this in turn increases host fitness in a microbiota-dependent manner,” said Laurie Comstock, a microbiologist at the Brigham and Women’s Hospital in Boston who wrote an editorial accompanying the study but was not involved in the work.

In the event of systemic bacterial infection, the host will try...

“This cytokine is known to control anti-microbial defenses,” said study coauthor Joseph Pickard, a graduate student in immunology at the University of Chicago. “Our study adds another, non-bactericide IL-22 function—the modulation of gut microbe activity by providing beneficial gut bacteria with a food source to support them during the infection.”

“Traditionally, studies of host-microbe interactions in animals have focused on the resistance response of detection and killing of microbes,” Janelle Ayres, an assistant professor at the Salk Institute for Biological Studies in La Jolla, California, who studies tolerance defenses in host-microbe interactions, wrote in an e-mail to The Scientist. But according to Ayres, tolerance as a defense strategy has been relatively unexplored in animals. “This elegant study demonstrates that the host employs a fucosylation-based mechanism to maintain a symbiotic relationship with its microbiota during infection, and in doing so, has unraveled a novel tolerance defense strategy,” wrote Ayres.

Along with Alexander Chervonsky, a professor of pathology at the University of Chicago, Pickard and his colleagues first observed inducible fucosylation of proteins in the small intestine upon systemic infection in mice. Ruling out a role of fucosylation in modifying digestive enzymes in the guts of the mice, the researchers tested whether addition of fucose to these proteins was serving as a food source for the microbiota. During a systemic infection, an animal typically stops eating, partly to conserve energy for defense against the pathogen. However, this typically has a detrimental effect on its microbiome.

Although mammalian cells use fucose as a signaling molecule, it is only a food source for microbes. The enzymes of specific microbes in the stomach and the intestines of animals can cleave the fucose attached to proteins. The researchers posited that this might be a way for the host to counteract the negative effects on the gut during systemic infection.

Fucose is available in the stomach and large intestine of healthy animals but is generally absent from the small intestine. The researchers injected molecules—Toll-like receptor ligands—that mimic a systemic infection into pathogen-free mice, resulting in sick animals that consumed less food and water and lost weight. Several hours after the injection, fucose was detectable in small intestine cells in wild-type mice but not those lacking the Fut2 gene, which encodes the (1,2) fucosyltransferase enzyme that fucosylates proteins on these cells. Innate immune cells were enough to induce fucose, the researchers found, as animals lacking T-cells could still induce the addition of the molecule on epithelial small intestine cells.

Commensal gut bacteria appeared to sense the presence of fucose in the systemically sick mice. These mice, which were also colonized with a reporter strain of E. coli expressing green fluorescence protein (GFP) linked to fucose metabolism genes, showed more GFP expression and higher expression of these genes, dependent on the presence of Fut2.

“The next big question is: What is the role of the microbiota in this process?” said Comstock. “Is it that these fucose-harvesting bacteria are able to occupy mucosal niches in the gut that may help protect the host during infection, or is there another mechanism?”

Chervonsky now wants to see how important this fucosylation pathway may be in humans. “About 20 percent of the population is missing the Fut2 gene, and this has been linked to Crohn’s disease.”

“We want to now see whether the lack of fucosylation in humans affects the gene expression in microbes and creates an inflammatory environment in the gut.”