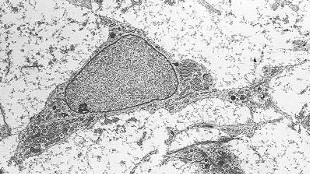 Mesenchymal stem cellWIKIMEDIA, ROBERT M. HUNTThe texture of the surface a cell grows on can influence how it develops and differentiates. Topography exerts this influence in part by altering the lengths of primary cilia, according to a study published today (December 18) in Scientific Reports. The study demonstrated that mesenchymal stem cells (MSCs)—a type of multipotent cell derived from bone marrow—have longer cilia when they grow on surfaces that are grooved rather than flat. The lengthened cilia alter Wnt/β-catenin signaling, an extracellular messaging system that drives spatial differentiation of cells.

“This intricate study is a wonderful contribution to the growing body of evidence demonstrating the powerful role of the primary cilium in regulating stem cell differentiation,” said David Hoey, a biomedical engineer at the University of Limerick in Ireland who was not involved in the study.

Previous work had shown that impairment of primary cilia leads...

Next, the researchers sought to understand whether the length of cilia affected Wnt/β-catenin signaling, a pathway key to cell differentiation. Previously, scientists had shown that cilia can sequester β-catenin using intraflagellar transport (IFT), in which small motor proteins move along cilia and lengthen them. Knight and colleagues speculated that longer cilia were sequestering more β-catenin than their shorter counterparts, and thus downregulating Wnt/β-catenin signaling by not allowing β-catenin to make it to the nucleus, where it acts as a transcription factor.

The researchers indeed found that cells with longer cilia tended to accumulate less β-catenin in the nucleus than cells with short cilia. When they knocked down IFT, which is believed to lengthen cilia and help sequester β-catenin, intranuclear β-catenin increased. Furthermore, the researchers showed that cells grown on a grooved surface responded less to Wnt signaling and accumulated less β-catenin in the nucleus than cells grown on flat surfaces—but this difference decreased if IFT was knocked down and cilia were not allowed to lengthen.

“[The researchers] have shown that even a slight change in ciliary length can dramatically affect Wnt signaling and subsequently the differentiation of MSCs,” said Hoey.

Knight and colleagues will next attempt to apply their work to a more practical context: bone regeneration. The researchers are currently working on creating orthopedic implants that will encourage bone regrowth around their edges. The team has observed that different materials have varying effects on how MSCs differentiate into bone-forming cells. Knight hopes to determine whether the topography of implant materials is influencing cell differentiation, and if so, whether cilia length is modulating Wnt/β-catenin signaling in the differentiating cells.

Understanding how topography alters cell differentiation could allow bioengineers to build better surfaces for controlling what types of cells they are able to grow. Or the cilia themselves could be manipulated to alter cell development: “Because the cilium is such a specialized target, that make it attractive for pharmaceutical manipulation and therefore manipulation of this differentiation process,” Knight said.

“[The study] holds significance in areas such as tissue engineering and regenerative medicine and highlights the cilium as a potential therapeutic target,” said Hoey.