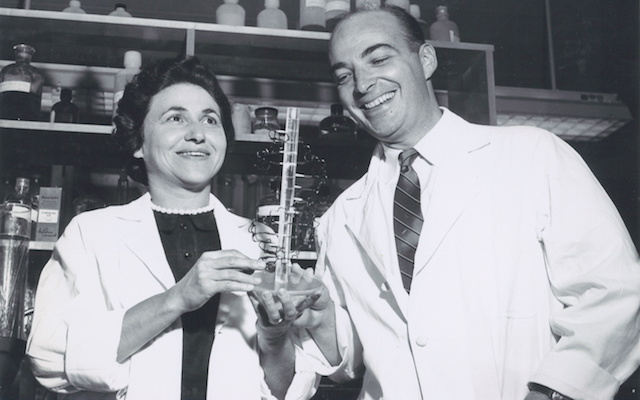 Sylvy Kornberg with her husband, Arthur Kornberg, at his Stanford University lab on the day he won the Nobel Prize in Medicine or Physiology in 1959.COURTESY OF KENNETH KORNBERG

This April, The Scientist was searching for the name of an unidentified woman featured in a photo with Jonathan Hartwell, an organic chemist who worked at the National Cancer Institute (NCI). The NCI was unable identify her, so we put out a call on social media to see if any of our readers could. A few weeks later, we heard back from architect Kenneth Kornberg—the person in the photo, he wrote, was his mother, Sylvy R. Levy Kornberg, a biochemist who worked with Hartwell at the NCI. She also conducted research at a number of universities, and contributed to work that eventually led to a Nobel prize. 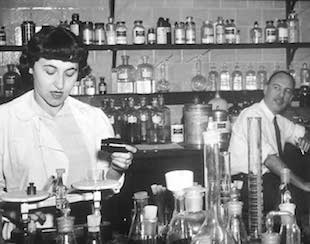 This is the photo that appeared in the April 2017 issue of The Scientist. Kornberg (left) worked in the lab with Jonathan Hartwell (right) at the NCI.FLICKR, NATIONAL CANCER INSTITUTEFor her graduate studies, Sylvy focused on lipid metabolism and published several papers before heading to the NCI. There, she worked with Hartwell, an organic chemist, on synthesizing novel carcinogens from plant extracts. “She was a wonderful person, very nice, knowledgeable, alert, and smart,” says Herbert Tabor, a senior investigator at the NIH who met Sylvy during those years.

In 1943, Sylvy married Arthur Kornberg, a scientist who was also working at the NIH. The pair had met at the University of Rochester, where Arthur attended medical school, and coincidentally ended up working in Bethesda at the same time afterward. They had three sons, Roger, Thomas, and Kenneth.

Sylvy and Arthur shared a love for biochemistry, and worked together in the lab for many years. Perhaps the most significant of those were at Washington University in St. Louis, where Arthur took a position as a professor and chair of the microbiology department and started a laboratory that was housed at the top floor of an old building at the university’s medical school. “It was very primitive—there were cinder block walls and cement doors, and we had the St. Louis summers that are legendary for their oppressive heat,” recalls Robert Lehman, a professor emeritus at Stanford University who was a postdoc in the lab at the time. “Arthur had a bench, he was working in the lab at the time. Sylvy was working right beside him.” 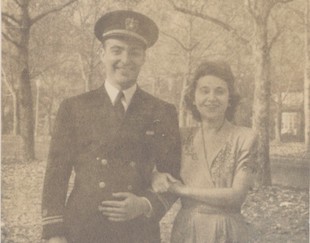 Arthur and Sylvy Kornberg on their wedding dayCOURTESY OF KENNETH KORNBERG

At this time, Sylvy’s research was focused on the synthesis of polyphosphates. She also made significant contributions to the lab’s work on DNA replication, such as uncovering an enzyme that degraded deoxyguanosine triphosphate. “We were having a major problem with inhibitors of the replication reaction, and she solved the problem,” Lehman says. “She identified an enzyme that inhibited the polymerization reaction because it destroyed one of the four essential triphosphates.”

“Sylvy was a gifted biochemist,” he adds.

The work on DNA replication conducted during those years led to Arthur’s Nobel Prize in Physiology or Medicine, which he shared with Severo Ochoa, a biochemist who was at New York University, in 1959 for discovering the mechanisms of DNA and RNA synthesis.

“The joke in the family—and it was just a joke—was that when the prize was announced, she said 'I was robbed!’” says Thomas Kornberg, Sylvy’s second son.

Shortly before the Nobel prize was announced, the Kornbergs relocated to California, where Arthur took a position as the chief of biochemistry at Stanford University. After the move, Sylvy continued to work in her husband’s lab for several years. However, she eventually grew tired of the daily grind and decided to stop her research activities and focus on her family. She did, however, continue to review and edit manuscripts from home.

“You must appreciate that it’s physical labor—people doing research stand at the bench for long hours,” says Roger Kornberg, Sylvy’s eldest son. “Very few people continue in that vein, almost everyone who was a serious scientist would graduate to a faculty position and direct the research of others . . . [Sylvy’s] deep interest in science, her enthusiasm, her work ethic, and all of that would, in today's world, have led to a very different status and kind of career.” The obstacles Sylvy faced were not only due to her gender but also her religious affiliation, he adds. She encountered discrimination for being Jewish, especially early in her career during the late 1930s and early ‘40s, when anti-Semitism was rampant.

After a brief hiatus, Sylvy returned to the lab for a couple of years and worked with Arthur on investigating the mechanism of an anti-cancer drug called bleomycin, which interferes with DNA replication. “But the work never really blossomed,” Roger says. “I think that her career really ended during that period, with the early onset of the neurologic degenerative disease that later took her life.”

The disease was a rare condition similar to ALS, and led to a gradual loss of motor function while leaving Sylvy’s cognitive function intact. After many years of battling the illness, she died in 1986.

Not only did Sylvy contribute significantly to Arthur’s successful career, the couple passed down their love of science to their children. Science was a frequent topic of conversation at home, and both Thomas and Roger eventually became professors: Thomas at the University of California, San Francisco, and Roger at Stanford University. In 2006, Roger won the Nobel Prize in Chemistry for his work on eukaryotic transcription.

After Sylvy’s death, Arthur eventually stopped working on DNA replication and returned to working on polyphosphate synthesis, which he continued to investigate until he passed away in 2007. “I think it was, in some ways, a reaction to the loss of my mother,” says Roger, “and wanting to return to the thing that they had most enjoyed doing together.”

Editor's note (June 14): We corrected the article to note that Sylvy and Arthur worked together at Washington University, not the University of Washington and updated the spelling of deoxyguanosine and organic.