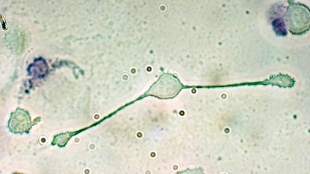 A macrophage at work in a mouse, stretching itself to gobble up two smaller particlesFLICKR, MAGNARAM A synthetic molecule attached to nanoparticles acts like a passport, convincing immune cells to let the particles pass unimpeded through the body, according to a study published today (February 21) in Science. The computationally designed “self”-peptide could be used to better target drugs to tumors, to ensure pacemakers are not rejected, and to enhance medical imaging technologies.

“It’s the first molecule that can be attached to anything to attenuate the innate immune system, which is currently limiting us from delivering therapeutic particles and implanting devices,” said Dennis Discher, a professor of biophysical engineering at the University of Pennsylvania and a coauthor of the study.

“This is really interesting work,” said Joseph DeSimone, a chemical engineer at the University of North Carolina, Chapel Hill, who was not involved in the research,...

Macrophages recognize, engulf, and clear out foreign invaders, whether they’re microbes entering through a wound or a drug-loaded nanoparticle injected to target disease. Previously, researchers have attempted to escape this response by coating nanoparticles with polymer “brushes” to physically block the adhesion of blood proteins that alert macrophages to the particles’ presence. But these brushes can only delay the macrophage-signaling proteins for so long, and they can hinder uptake by the diseased cells being targeted.

With that in mind, Discher and colleagues tried instead to find a way to convince macrophages that nanoparticles are part of the body. Their previous research had shown that a membrane protein called CD47, which binds to macrophages in humans, signals “self” to the immune system, so that particles with this protein are not attacked.

Examining the architecture of the bond between CD47 and its macrophage receptor, SIRPα, the researchers were able to design a synthetic self-peptide with a similarly snug fit. “This is the key, literally, to unlocking innate immune pacification,” said Discher.

When they chemically synthesized the 21-amino-acid self-peptide and attached it to nanobeads as small as viruses in mice genetically engineered to have human-like SIRPα receptors, the researchers showed that beads with the self-peptide stayed in the blood of for longer than beads with no peptide: 30 minutes after being injected with equal numbers of each type, there were 4 times as many beads with the peptide attached than without. The results demonstrate that the synthetic molecule can reduce the rate at which phagocytes clear the beads from the body, said Discher.

Then, in mice with human lung cancer, the researchers injected fluorescently dyed beads with and without the peptide, and saw that the “self”-beads got through the macrophage-filled spleen and liver and accumulated in greater numbers in the tumor, providing a brighter signal under when imaged. In fact, the self-beads provided a signal from the tumor as strong as beads coated with human CD47.

Finally, to see whether the biological evasion strategy can be successfully combined with targeting, the researchers loaded an anticancer drug into self-beads also coated with antibodies that target cancer cells. Sure enough, these antibody-coated self-beads consistently shrank tumors more than antibody-coated beads lacking the peptide. This confirmed that when antibodies draw the attention of the macrophage, the self-peptides inhibit the macrophage’s response, acting as a “don’t-eat-me” signal, said Discher.

The results demonstrate that the synthetic peptide can provide therapeutic nanoparticles with extra time in the body—time that improves drug delivery. Furthermore, the relative simplicity of the peptide means it can be easily synthesized, making it an attractive component for use in a variety of future applications.

“The findings are “compelling” and “the technology merits moving forward,” Omid Farokhzad, director of the Laboratory of Nanomedicine and Biomaterials at Brigham and Women’s Hospital, part of Harvard Medical School, said in an e-mail to The Scientist.

A crucial next step is to test the efficacy of synthetic self-peptides in humans, Farokhzad added. “The truly relevant test is looking at human pharmacokinetics to see circulating half-life advantages of nanoparticles and their effect on therapeutic outcome.”