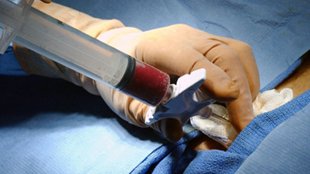 Harvesting bone marrow for transplantWIKIMEDIA, AXELBOLDTThe drug cyclophosphamide is effective at preventing graft-versus-host disease in patients that have received bone marrow transplants, but until now it wasn’t clear how the drug worked. A paper published today (November 13) in Science Translational Medicine reveals that while the compound destroys some immune cells that might cause graft-versus host disease, it spares regulatory T cells (Tregs)—immune-suppressing cells that promote tolerance of foreign tissue.

“How the low incidence of graft-versus-host disease could occur through post-transplant cyclophosphamide was a mystery, and I think . . . there is now a plausible mechanism,” said Krishna Komanduri, a professor of medicine, microbiology and immunology at the University of Miami in Florida, who was not involved in the study.

Patients with blood diseases like leukemia and lymphoma often require bone marrow transplants to replace the diseased cells with healthy immune cells. However, the...

Cyclophosphamide is better known for its use as a chemotherapy agent, said Leo Luznik, a professor of oncology and hematologic malignancies at Johns Hopkins University in Baltimore, Maryland, who led the new study. “It kills proliferating tumor cells,” he explained.

This targeting of cycling cells was precisely the rationale for using the drug after bone marrow transplant. The thought was that the most rapidly proliferating cells would be those that were alloreactive—capable of mounting an attack against host cells, said Luznik.  “Hopefully, the good [cells] that would be fighting the leukemia and infections would not be proliferating and would be preserved,” he said.

But evidence from mouse studies suggested that the action of cyclophosphamide might also require the generation of Tregs, which are known to promote tolerance. Now, Luznik and colleagues show that in patients who received bone marrow transplants and post-transplant cyclophosphamide, Treg proliferation did indeed increase, yet these cells remained resistant to cyclophosphamide.

The team found elevated levels of an enzyme called aldehyde dehydrogenase, which is known to convey resistance to cyclophosphamide in stem cells, in the Tregs—10 times higher when compared with other T cell types. They then showed that inhibiting the enzyme resulted in increased cell death of Tregs in response to mafosfamide, which is an analog of cyclophosphamide used for in vitro studies. Furthermore, removing Tregs from mice abolished the protective effect of cyclophosphamide against GVHD.

The original proposed mechanism “had really been focused predominantly on the ability to remove the rapidly cycling cells, but now it’s focusing more on a potential Treg mechanism,” said Jonathan Serody, a professor of microbiology and immunology at the University of North Carolina, Chapel Hill, who was not involved in the work. The findings lend credence to treatments in which Tregs themselves are given to transplant patients to prevent GVHD, he said. Indeed, early clinical trials have indicated that such Treg infusions may be beneficial.

However, unlike Treg infusions, cyclophosphamide treatment does not require any cellular manipulation, said Komanduri. It has some other benefits, too. For one, said Luznik, “this drug is very cheap.” And unlike the standard immunosuppressive drugs, post-transplant cyclophosphamide treatment is restricted to a few days after transplant, added Christopher Kanakry, lead author of the new study. “There’s no additional immunosuppression for six months or more, which is commonly done with other [treatments],” he said.

“There are lots of advantages to the approach,” said Kanakry. “Whether ultimately it’s going to prove to be the best way forward or not, I think will be shown by further studies.”

The aim of the new work, he said, “was not to promote the post-transplant cyclophosphamide approach, so much as to better understand it so that we can improve it.” After all, 10 percent of patients receiving the drug still go on to develop chronic GVHD. Kanakry and Luznik would like that percentage to be zero.