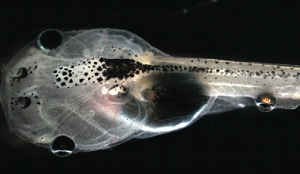 Xenopus laevis tadpole with an extra eye grafted onto its tail.Douglas BlackistonBlind tadpoles can be gifted with sight from grafted eye tissue—even when that tissue is put in their tails. In new research published today (February 27) in The Journal of Experimental Biology, researchers at Tufts University showed that eyes grafted onto tadpole tails allowed the amphibians to learn the difference between two colors of light—even though the new eyes’ nerves don’t reach the brain.

The research shows that “animals are very adaptive beyond what we thought before,” said Josh Bongard, a roboticist at the University of Vermont who was not involved in the research. The findings could help inspire “flexible” robots that easily adapt to new inputs, immediately taking advantage of information from a new camera that wasn’t included in the robot’s original design, for example.

The findings may also have implications for designing functional...

Tadpole brains—like other vertebrate brains—evolved to expect sensory inputs from a body with a specific pattern. But amphibians (and to a lesser degree other animals) undergo drastic body alterations during development, suggesting a great capacity for brain plasticity. To gain clues what underlies this normal process, developmental biologist Michael Levin decided to push amphibian brains beyond their normal flexibility and examine “how the brain learns to deal with bodies that have a radically different architecture than expected,” he said—like having eyes in the tail rather than the head.

Decades old work by other scientists had shown that Xenopus laevis tadpoles could grow extra eyes, but no one had examined whether these new eyes could communicate visual information to the brain. To test this, Levin and first author Douglas Blackiston grafted embryonic eye precursor tissue onto the tails of tadpoles whose own eyes had been surgically removed. The tissue developed into eyes that projected nerves into surrounding tissue. In a few rare tadpoles, these nerves connected with the spinal cord, but no ectopic eyes connected directly to the brain.

To show that the frogs’ brains could process the new visual stimuli, the researchers designed a light-based learning task. They shone either red or blue LED light into different quadrants of the tadpoles’ dishes, then zapped them with a slight electric shock if they strayed into the red zone. They then tested whether the tadpoles avoided red light in the absence of shocks. If tadpoles spent less than 10 percent of training time being “punished,” and avoided red-lit areas more than 70 percent of the time after training, they were considered successful learners. While none of the blinded tadpoles succeeded, a few with ectopic eyes met the criteria, showing that their brains were processing visual stimuli from the new eyes in their tails.

Strikingly, only tadpoles whose ectopic eyes innervated the spinal cord could learn to avoid red light. ”We showed the ectopic eyes don’t need to connect directly to the brain” for successful visual learning, Levin said.

But tadpole brains are designed to receive visual input through the optic nerve, not from the spinal cord, which usually sends somatosensory information. The big question now is how the brain is receiving and processing the visual information, said Zupanc. “Do the ectopic eyes connect to the brain in a diffuse way, or do they connect specifically with the visual processing center?”

Levin, for one, thinks that the secret to the brain’s ability to process stimuli from ectopic eyes may be that sensory inputs from each organ are “tagged” with identifying information that allows the brain to recognize, for example, visual stimuli regardless of whether it’s carried by the spinal cord or optic nerve. He and Blackiston are currently working on tracking signals from the ectopic eyes to the brain, as well as controlling the direction of nerve growth to encourage nerves from the extra eyes to make spinal cord contact.

It’s not clear how well the work will translate to other species. Zupanc expects that it will be difficult to recreate the findings in animals that don’t possess amphibians’ enviable regenerative capabilities, but Levin disagrees. “The plasticity of the brain is enormous,” he noted. “I think it’s super fundamental to how all animals work.”