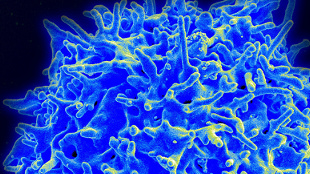 NATIONAL INSTITUTE OF ALLERGY AND INFECTIOUS DISEASESA vaccine targeting a mutation found in a subset of tumors, including slow-growing brain malignancies called gliomas, can induce an immune response and prevent tumor progression in mice, according to a study published today (June 25) in Nature. Michael Platten, a neuro-oncologist at the German Cancer Research Center in Heidelberg, Germany, and his colleagues have shown in a mouse model of glioma that this peptide vaccine induces a mutation-specific immune response and can fight pre-existing tumors.

“This is a proof-of-principle study,” said Darell Bigner, a cancer researcher and brain tumor expert at Duke University in North Carolina. “The tumor-specific peptides [used in this study] have potential as a tumor vaccine, and should be evaluated in human clinical trials.”

The vaccine contains a short peptide sequence of the point mutation in the isocitrate dehydrogenase type 1 (IDH1), which is found in...

The goal of cancer vaccines is to boost the immune system’s ability to recognize tumors as foreign. But so far, tumor-specific vaccines, which have mostly been tested in advanced cancer patients, have generally not been found to improve survival. Vaccinating against a single tumor-associated mutation has presented researchers with a challenge, as the spectrum of mutations change as a tumor progresses.

Still, targeting a so-called driver mutation—one that occurs early in tumor development and is likely to be required to sustain tumor growth—may be a viable approach. The IDH1 mutation is thought to be such a driver: it’s one of the earliest mutations to arise in gliomas, and is found in the vast majority of cells within the same tumor. “In the case of gliomas, this tumor-specific antigen may be sufficient as there is no heterogeneity [within individual tumors], to our knowledge which also made this an attractive immunotherapy target,” said Platten.

The researchers vaccinated mice that had a humanized version of the major histocompatibility complex (MHC), a set of cell surface molecules that are necessary to mediate specific immunity against antigens, either pathogens or tumor molecules. Because the MHC system differs between mice and humans, this humanized mouse model is a better first preclinical attempt to evaluate the potential utility of an immunotherapy prior to a first-in-human study. The immune response to the vaccine was restricted to a specific type of T cell response, the CD4-positive T cell and was able to control the IDH1 mutation expressing tumors in the mice.

The mice used to test the vaccine developed sarcomas rather than gliomas. “Many questions on whether this vaccine will work the same way on gliomas and other tumors with IDH1 mutations remain,” said Bigner.

The researchers also showed that four out of 25 patients with gliomas had innate T cell responses to the IDH1 mutations of their tumors.

Based on these results, Platten and colleagues in Germany are now going ahead with a small clinical trial to test the safety and immunogenicity of the vaccine in newly diagnosed IDH1-mutated glioma patients. Patients will receive chemotherapy along with the vaccine. “The tumors we are targeting are rather slow-growing . . . as opposed to very aggressive tumors,” said Platten. “This is an advantage because we have a larger time window of opportunity to induce immunity and the patients are not yet immune-compromised from prior chemotherapies.”

“The ultimate goal would be to target gliomas with a combination of active vaccination and a tumor microenvironment-targeted therapy,” said Platten. The vaccine could, in theory, also be effective for other tumor types that harbor the IDH1 mutation.

“Cancer vaccination is making a major rebound. There are many exciting trials coming up based on preclinical data,” said Drew Pardoll, an immune-oncology expert at the Johns Hopkins University School of Medicine. “Combining cancer vaccines with the new [immune checkpoint-inhibiting] antibodies is one of several exciting approaches in cancer vaccination right now.”