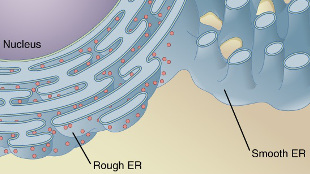 Illustration from Anatomy & PhysiologyWIKIMEDIA, OPENSTAX COLLEGEThe endoplasmic reticulum (ER) has specific receptors that target it for autophagy, or intracellular recycling, according to two independent studies published this month (June 3) in Nature. Hitoshi Nakatogawa of the Tokyo Institute of Technology led a team that identified these receptors in yeast. Ivan Dikic of the Goethe University School of Medicine led a team that examined the same kinds of receptors in mice.

“The major finding is that ER . . . has a homeostatic mechanism to remodel itself, to turn over its own contents,” said Dikic. “And that this mechanism, which regulates this housekeeping function, is mediated by selective autophagy.”

“Both studies report a mechanism that cells can use to selectively sequester the ER for degradation via autophagy. This is accomplished by receptors that the studies identify that bind to the ER and also to components of...

Autophagy is a process by which eukaryotic cells break down and recycle their own materials. In autophagy, a cup-shaped structure called the phagophore engulfs material in a double-membraned bubble called the autophagosome. The autophagosome then fuses with another organelle, the lysosome, which is filled with enzymes for breaking down proteins and other molecules into their constituents.

“One of the questions that has been longstanding in the field is . . . how and if the autophagosomes select what they’re going to eat,” explained Sharon Tooze, who studies autophagy at the Francis Crick Institute in the U.K, but was not involved in the work.

In what’s called macroautophagy, autophagosomes are thought to “[engulf] whatever happens to be adjacent to them,” said Tooze. Macroautophagy is generally considered nonselective. However, scientists have recently discovered several types of selective autophagy—processes that lead to specific degradation of mitochondria or pathogens, for example.

This selective autophagy is usually mediated by the interaction of proteins on the target organelle or pathogen with proteins on the phagophore—LC3 in mammals, Atg8 in yeast—which flag the targets for engulfment. LC3 and Atg8 are like locks that, in selective autophagy, require keys. Separately, in screens for proteins that bind to the phagophore “lock” proteins, Nakatogawa and Dikic have identified such keys on the ER.

Dikic’s team homed in on the mammalian protein FAM134B, which, when overexpressed in human cell lines, leads to ER degradation in the lysosomes, as observed by electron microscopy. The researchers also found that knocking down the gene in human cells led to ER expansion. Working in yeast, Nakatogawa’s team identified a protein called Atg40 on the cytoplasmic ER and a different receptor, Atg39, on the ER surrounding the nucleus, both of which target the ER for autophagy.

Whereas the yeast (Atg8) and mammalian (LC3) autophagy receptors are homologous, the yeast ER receptor Atg40 and the mammalian FAM134 are not, Nakatogawa told The Scientist in an e-mail. “Atg40 does not show a sequence similarity to FAM134, but this protein is probably its functional homolog, because their functions (ER-phagy receptors), domain architectures, and localization (cytoplasmic ER) are similar.” The perinuclear autophagy receptor that the Nakatogawa group found in yeast ER (Atg39), on the other hand, is a “completely different protein” from the others, Nakatogawa said.

In humans, mutations in FAM134B lead to a particular kind of neuropathy involving reduced pain sensation and heat sensitivity, as Dikic’s collaborators previously reported. So Dikic’s team disrupted the Fam134b gene in mice and found that, as in humans with hereditary sensory and autonomic neuropathy type II, the mice were less sensitive to heat (tested by dipping their tails in hot water). Mouse embryonic fibroblast cells isolated from the mutants also showed expanded ER.

Precisely how autophagy of the ER is regulated has yet to be found.

“We don’t really understand . . . the relevance of how it’s regulated, whether or not it’s phosphorylation or another mechanism which will signal this part of the ER to be eaten, or whether or not it’s sort of a homeostasis steady-state condition,” said Tooze.

Dikic said he suspects that the ER is not turned over constantly, but is targeted for autophagy after the accumulation of damage to proteins and lipids embedded in the ER membrane or within the lumen. Beyond exploring how autophagy of the ER is regulated, he and his colleagues are now working to understand why there are different autophagy receptors for perinuclear and cytoplasmic ER and searching for perinuclear autophagy receptors in mammalian cells.