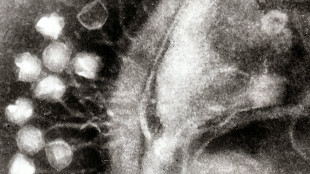 WIKIMEDIA, DR GRAHAM BEARDS Using bacteriophages to deliver a specific CRISPR/Cas system into antibiotic-resistant bacteria can sensitize the microbes to the drugs, according to a study published this week (May 18) in PNAS. The approach, developed by Udi Qimron of Tel Aviv University and his colleagues, is a modified version of phage therapy that does not require the delivery of phages to infected tissues and could help offset the pressure on bacterial populations to evolve drug resistance, according to the team.

Unlike classic phage therapy, which uses one or more types of phages to infect and lyse specific bacterial strains, the crux of this new approach is using these specialized viruses to supply CRISPR/Cas to rid bacteria of antibiotic-resistance plasmids in the environment before the microbes are able to infect a host. Each phage is specific to a bacterial species or strain and, using CRISPR, researchers can target...

“The CRISPR technique is at the heart of [this work],” said Michael Terns, a research professor of biochemistry, molecular biology, genetics, and microbiology at the University of Georgia who was not involved in the work. “It’s a nice application of the CRISPR system to attack resistance genes using phage as a vehicle.”

“The classic phage approach doesn’t distinguish between bacteria that are truly pathogenic versus their very similar neighbors,” said Timothy Lu, a professor of biological and electrical engineering at MIT who was not involved in the work. “The idea of CRISPR-based approaches is to enact sequence-specific antimicrobial activity, placing selective pressure against genes that are bad rather than conserved bacterial targets.”

Qimron and his colleagues first created an E. coli-targeting lambda phage that encodes the CRISPR genes plus spacers that target two conserved β lactamases, enzymes that confer resistance to β-lactam antibiotics. Once integrated into the E. coli genome, the phage prevented the transfer of β lactamase-encoding plasmids and could also delete these plasmids from individual bacterial cells. These lambda phage-encoding bacteria become sensitive to treatment with antibiotics.

His team was not the first to use this approach. Lu and his colleagues last year showed that they could kill antibiotic-resistant bacteria using phages that transferred an antibiotic-resistance targeting CRISPR/Cas system. Another group showed that the CRISPR/Cas9 system could be used reduce the colonization of skin by virulent Staphylococcus aureus in a mouse model.

Among the potential limitations of this approach, “finding a phage for each pathogenic strain is something that has to be worked out,” Terns told The Scientist.

Qimron’s team will next try to apply this CRISPR/phage system on Pseudomonas aeruginosa—one of the world’s most prevalent antibiotic-resistant pathogens that cause hospital-acquired infections—and test whether bacterial sensitization works in a more complex microbial environment—the mouse cage.

While promising, the approach does not address the development of antibiotic resistance. Lu noted that resensitizing drug-resistant bacteria is only a piece of the puzzle. “The way I view it is not that we will be able to make an evolution-proof therapy, but that the genetic engineering tools will become more robust so that as evolution happens, we can rapidly develop countermeasures,” he said. “It will be very hard to make evolution-proof therapy, there is just too much pressure for the bacteria to survive.”