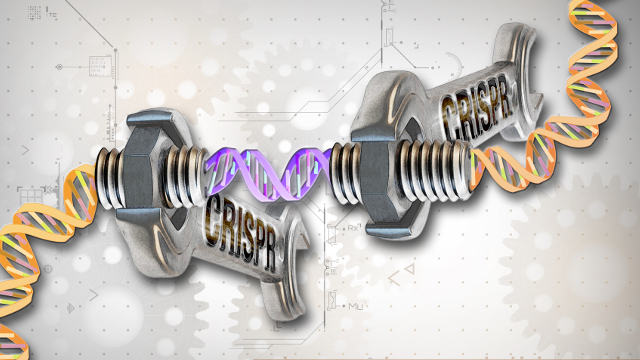 Researchers at MIT and the Broad Institute of MIT and Harvard used a large single guide RNA (sgRNA) library to identify noncoding elements that affect the regulation of genes that confer cancer drug resistance. Their work is published today (September 29) in Science. In a separate study also published today in Science, another team—from MIT, Harvard, and the Broad—used a high-throughput CRISPRi screen to find noncoding regulatory elements within a 1 megabase distance of two disease-related genes.

“[Both CRISPR screens] target what has been very difficult to do thus far—noncoding regions...

“The researchers use these CRISPR tools at scales that surpass prior studies and in novel ways—to dissect gene expression pathways or to identify how genetic pathways can affect drug resistance,” said Sidi Chen, a genomics researcher at the Yale School of Medicine who also was not involved in the work.

“These are the first systematic, direct assays of enhancer regions in the genome,” noted Traver Hart, a cancer genomics researcher at the MD Anderson Cancer Center in Houston, Texas, wrote in an email to The Scientist.

The Broad’s Feng Zhang and colleagues conducted a 715 kilobase-wide CRISPR/Cas9 screen using a library of 18,000 sgRNAs to tile within 100 kilobases surrounding three genes: CUL3, NF1, and NF2. The researchers identified noncoding sites that, when mutated, resulted in lower expression of one of the genes. The promoter and enhancer elements that regulate these genes are of interest because loss-of-function mutations related to each have been previously linked to resistance to vemurafenib, a drug used to treat BRAF V600E-mutated metastatic melanoma.

Rather than synthesizing individual sgRNAs, the team printed the individual RNAs on a solid array like the ones used for hybridization studies, but then cleaved the RNAs and cloned them into lentiviral vectors.

The researchers transduced one sgRNA per human melanoma cell that carries the BRAF gene mutation and cultured the cells in either a control or vemurafenib-spiked medium. They then used deep sequencing to identify CRISPR-mutated loci enriched in the drug-exposed cells. The researchers isolated hundreds of loci—mostly in the 5’ ends of the target genes—that when mutated, decreased gene expression and validated that 24 of 25 loci surrounding CUL3 indeed resulted in reduced transcription and vemurafenib resistance.

“Compared to the sequences of protein-coding genes, we don’t know much about noncoding regulatory elements,” said study coauthor Neville Sanjana, of the New York Genome Center and New York University who was a postdoc in Zhang’s lab. “Our study and other gene-editing screens will enable us to discover the rules that govern these important parts of the genome.”

Of the noncoding regulatory elements the team identified, what surprised Sanjana was that most of these would not have been found with traditional techniques used to identify open chromatin regions.

Separately, Harvard graduate student Charles Fulco, along with postdoc Jesse Engreitz of the Broad and their colleagues, analyzed 1.29 megabases of sequence near the MYC or GATA1 genes using a CRISPRi screen of a tiled 98,000 sgRNA library—“the scale we need to be able to comprehensively discover all of the sequences that might regulate a given gene,” Engreitz wrote in an email.

“Our results open up new questions about how these elements might interact with one another,” wrote Engreitz. “Perhaps the second-order effects between these elements are important for determining precise levels of gene expression.”

Both teams see mapping regulatory elements using these tools as a way to understand how genetic variation is linked to human diseases. Like Sanjana, Engreitz said he believes that performing more of these experiments could uncover some of the “fundamental principles that govern the regulatory wiring” of entire genomes.

Chen agreed. “Virtually everything—cancer and other diseases, physiological processes and development—[is] regulated at the gene-expression level,” he told The Scientist. “The power to discover noncoding gene regulatory elements in an unbiased manner is what makes these great tools.”

“These approaches provide a critical proof of concept for how to systematically perform perturbation assays on arbitrary genomic loci and measure their effect on specific genes,” wrote Hart.

Each screening technique has its own advantages and drawbacks. The CRISPR/Cas9 method allows for fine-tuned changes of one to 10 bases while the CRISPRi approach, in contrast, has a larger footprint (around 200 bases), allowing the targeting of more of the genome at a time. But this CRISPR modification does not enable reliably precise identification of functional elements. Both methods are limited by the inability of sgRNAs to target certain genomic sequences.

Sanjana’s lab is now developing ways to improve CRISPR/Cas9 genomic screening including scaling up the technology to handle longer genomic stretches. “One of the huge challenges ahead is to extend this from one million to the full 3.2 billion bases in the human genome,” wrote Harvard’s George Church, who was not involved in either study, in an email to The Scientist.