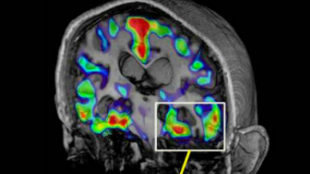 NEURON, MARUYAMA ET AL.The only way to truly confirm a diagnosis of Alzheimer's disease is through an autopsy, and researchers have been working on ways to image the neurodegenerative disease before it's too late. A few groups are forging ahead to image tau—a protein whose clusters in neurons are associated with Alzheimer's—in living humans using tracer molecules and positron emission tomography (PET). Data from one such molecule, imaged in six adults, were reported today (September 18) in Neuron.

“I think this is really fine work,” said William Jagust, a professor at the University of California, Berkeley, who was not involved in the study. “The images look good.”

The research team, led by Makoto Higuchi at the National Institute of Radiological Sciences in Japan, also showed that this particular tau label can be used to image another so-called tauopathy, corticobasal syndrome. “That's interesting because [tauopathies] are diseases where...

Already, companies have developed molecules to visualize aggregates of amyloid ß, another Alzheimer's culprit. Tau imaging, however, has lagged behind, and there are currently no tau-specific ligands on the market, although two other groups are in the early stages of testing their fluorescent label candidates in humans. The ability to image tau “is critical for the field, since tangles first appear in brain regions that are very closely linked to memory, and pathologic studies have shown that tangles might even correlate more strongly with cognition than plaques,” Murali Doraiswamy, a professor of psychiatry and behavioral sciences at Duke University Medical Center who also did not participate in the study, said in an email to The Scientist.

The trick to developing a good label is to find a compound that will cross the blood-brain barrier, not stick to anything other than tau, and hang around long enough for a PET scan to catch it. Higuchi and his colleagues modified an amyloid dye to make phenyl/pyridinylbutadienyl-benzothiazoles/benzothiazoliums (PBBs), which they showed have a high affinity for intracellular tau. After conducting a number of rodent studies, they injected a 11C-tagged PBB into six people, three of whom were suspected to have Alzheimer's.

They found that PBB bound to the hippocampal region stronger in the patients with probable Alzheimer's than in healthy individuals. The brain scans of the two patients who had shown the greatest cognitive decline also showed more intense labeling in the medial temporal region, precuneus, and frontal cortex, consistent with later stages of disease progression. “It's a small number [of subjects], but [the approach] looks promising,” said John Trojanowski, study coauthor and a professor at the University of Pennsylvania Perelman School of Medicine.

“Here's a good, clean representation of tau imaging that seems to recognize intracellular tau in particular,” said Marwan Sabbagh, a neurologist and the director of the Banner Sun Health Research Institute in Sun City, Arizona. Sabbagh said tau imaging has been a challenge because the protein resides within cells, requiring a tracer to invade neurons. “That’s why it's a big deal,” he said. “You can image intraneuronal processes.”

Extensive studies to correlate tau labeling with the progression of the disease to actually use it in diagnosing Alzheimer's or other tau-related diseases are needed, Sabbagh said. Perhaps the best application for now, Trojanowski said, is in clinical trials aimed at a potential cure. “We need to know . . . that we’re treating people who have disease pathology,” he told The Scientist.

One of the main limitations of Higuchi's tracer is that the radioactive carbon has a half-life of just about 20 minutes, making it a challenge for clinical use. Doraiswamy added that in the present study, “the separation of signal between [Alzheimer's disease] and normal [patients] was not huge, so it remains to be seen if these differences remain when we start doing studies in bigger samples.”

It's unclear which of the tau labels currently in development will be deemed superior, said Jagust. Regardless, he's pleased to see progress. “With tau, things are moving. It's very exciting.”