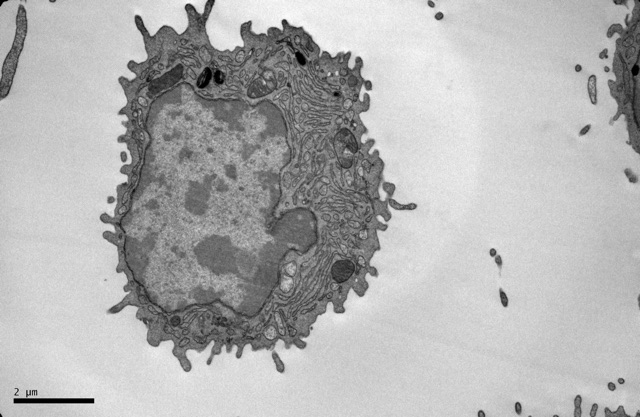 Representative transmission electron microscopy (TEM) image of a B cell stimulated in vitro with CpG/antigen particle, showing endoplasmic reticulum (ER) characteristic of a plasma cell.SANJUAN NANDIN I., DOMART, M-C; COLLINSON, L. From life-saving diagnostics and treatments to essential reagents, it’s hard to overstate the importance of antibodies in the biomedical world. Thus far there’s always been one hitch or another in the goal to rapidly and easily generate highly specific, high-affinity, fully human antibodies at relatively low cost. By a simple tweak to an established protocol, researchers have developed a platform that may bring the field closer to that goal.

In The Journal of Experimental Medicine on July 24, Facundo Batista, associate director of the Ragon Institute, and colleagues describe an in vitro method by which the signal to activate antibody-producing cells is delivered only in the presence of specific antigen—a technique that enables antigen-specific B cells...

“There are multiple ways to make or isolate human monoclonal antibodies, but they all have their flaws,” notes Shane Crotty, a professor at the La Jolla Institute for Allergy & Immunology, who was not involved in the study, by email. “Batista has developed a new technique that is independent of previous techniques and therefore is a valuable addition to the arsenal of monoclonal antibody discovery techniques.”

B cells produce antibodies after being stimulated through their cell-surface antigen-specific B cell receptor (BCR) along with a costimulatory signal. Among the costimulatory signals known to activate B cells are unmethylated stretches of DNA containing the CpG dinucleotide, found in bacteria but rare in mammals, which binds to the internal toll-like receptor (TLR).

In vitro, soluble CpG oligonucleotides have been exploited to expand B cell populations from previously infected or vaccinated individuals by mimicking infection. The problem is that in vitro, soluble CpGs are taken up indiscriminately, polyclonally activating B cells regardless of whether the BCR itself has been engaged. The stimulated B cells then need to be extensively screened in order to find the rare ones producing the antibodies of interest, which can then be isolated and retrieved to make monoclonal antibodies. Simply engaging the BCR by itself—without CpG costimulation—does not induce antibody production.

By linking two stimuli—an antigen, such as a viral protein that engages a specific BCR, and the CpG—onto a particle and exposing that to B cells in vitro, Batista’s group was able to stimulate and expand a large proportion of B cells in an antigen-specific manner.

“Investigators have long sought in vitro methods to enhance the frequency or quality of antibodies encoded by naturally occurring B cells,” comments James Crowe, director of the Vanderbilt Vaccine Center, who was not involved with the project, by email. “This study offers a step forward in those efforts by physically coupling a general stimulatory signal (the TLR agonist CpG) with a microbial antigen on a nanoparticle.”

See “Exercises for Your Abs”

Previous protocols called for immunizing volunteers seven days prior to drawing blood, or using elaborate screening procedures to find the rare antigen-specific B cells remaining after a longer interval—for example, finding and cloning antibodies from a 95-year old survivor of the 1918 influenza pandemic. But here, by taking blood and stimulating B cells in vitro for six days with CpG/antigen-coated particles, “we don’t need to do any screening because one in three or one in 10 are plasma cells producing our antibody,” Batista says.

Not surprisingly, the group was able to recover significant populations of plasma cells that produce antibodies against antigens such as tetanus toxin, against which most volunteers were vaccinated in the past. But they also were able to generate cross-reactive antibodies to antigens that the volunteers had not directly seen: influenza H5- and H7-specific antigens, for example, yielded antibodies that recognized other sub-types of flu. And HIV gp120 antigen was able to generate HIV-reactive antibodies from non-infected donors, indicating the potential of the platform “to interrogate antigens that we haven’t experienced before,” Batista notes.

Batista adds that in addition to generating novel antibodies to be used for therapy and reagents, the platform may be useful to evaluate the immune repertoire in vitro, for example, to gauge the usefulness of different antigens as potential vaccines.