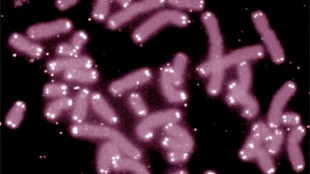 WIKIPEDIA, NASADUX4, a gene responsible for the genetic disease facioscapulohumeral muscular dystrophy (FSHD), is normally silenced because it sits next to a telomere—a protective DNA sequence that caps the ends of chromosomes, according to a study published today (May 5) in Nature Structural and Molecular Biology. But as telomeres shorten, as they do with age, DUX4 expression climbs, which may explain the late onset of FSHD. Another gene, called FRG2, which sits 100 kilobases away from the telomere, is also affected by telomere length.

“This was completely unexpected,” said coauthor Guido Stadler at the University of Texas Southwestern Medical Center in Dallas, since earlier studies showed that telomeres only silence genes a few kilobases away. Stradler and his colleagues even found preliminary evidence that telomeres can also influence a gene even more distant on the chromosome, 1,000 kilobases away—an effect that disappears as the telomere shortens.

FSHD is an inherited disease that causes the upper body muscles to gradually waste away. Most such genetic disorders manifest during early childhood, but FSHD is unusual in symptoms usually appear when people are in their teens or early 20s.

To investigate this delay, Stadler created lines of muscle-making cells using muscle tissues from FSHD patients and unaffected family members, and manipulated the lengths of their telomeres. As the telomeres got shorter, DUX4 gradually became over 10 times more active, in a greater proportion of cells, explaining late onset of FSHD symptoms in people who inherit -the disease-associated version of DUX4.

It is possible that doctors may eventually consider telomere length when offering a prognosis or advice about FSHD, or try to control the disease with treatments that lengthen telomeres.  Of course, Stadler said, “before patients may benefit from our findings, we need to do a lot of work, especially to confirm that our in vitro findings hold true in vivo.”

Alexandra Belayew from the University of Mons in Belgium, who was not involved in the study, said the results aren’t a “major conceptual change” for FSHD researchers, who largely agree that DUX4 activation is the major cause of the disease. “What is new is the proposed mechanism by which aging contributes to disease progression,” she said.

And the experiments with FRG2, which showed a similar pattern of increased activity with shortening telomeres, emphasized that even genes more distant from the chromosome’s ends could be affected in this way as we age.

Stadler’s results also solve another mystery about FSHD—why so few people carrying the known FSHD mutations actually develop the disease. DUX4 lies within a repetitive stretch of DNA at one end of chromosome 4. People with FSHD only have 1 to 10 copies of DUX4 (most have up to 100), as well as mutations in the gene that allow it to be stably expressed. But this combination of features is found in around 1 percent of the population, and FSHD only affects 1 in 20,000 people.

Stadler suggests that people who carry FSHD mutations but never show symptoms might be born with exceptionally long telomeres, or have telomeres that shorten slowly thanks to genetic or environmental factors.

“The paper highlights the complexity of FSHD, which cannot be explained with the classical model in which a mutated gene causes a disease,” said Rosella Tupler from the University of Massachusetts Medical School, who was not involved in the study.

The team will now study people with FSHD to see if the length of their telomeres correlates with the onset and progression of their disease. They also want to work out how the length of telomeres affects the activity of other nearby genes. Belayew added, “Does telomere shortening play a role in infantile FSHD in which clinical manifestations are seen much earlier?”