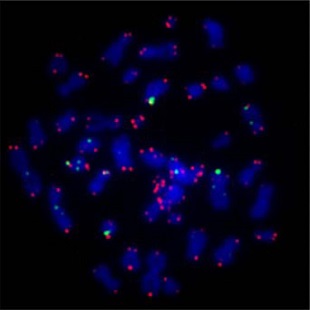 Chromosomes in metaphase with telomeric DNA stained red.WIKIMEDIA, ASAKO NAKAMURA ET AL.Telomere length in children is associated with a stressful home environment, and genes that encode certain neurotransmitters may heighten the effect of that stress, according to a study published today (April 7) in PNAS. Researchers led by Daniel Notterman of Pennsylvania State University studied 40 African American boys who were part of a large ongoing study of family stability, finding that children living in the most stressful environments had telomeres that were on average 40 percent shorter than those of the children studied who were living in the most nurturing settings. The researchers also found that those differences were exacerbated by variants in genetic pathways related to dopamine and serotonin production.

Telomeres are long repetitive regions of nucleotides at the end of each chromosome. Along with the enzyme telomerase, they protect the ends of chromosomes from degrading or fusing with other chromosomes. Most studies that seek to evaluate the effects of stress on child development involve adults recalling their early-life memories. An ongoing study of the effect of family structure on childhood development—the Fragile Families and Child Wellbeing Study—provided the Penn State team with an opportunity to study the effects of stress on telomere length in children, and in real time. Fragile Families and Child Wellbeing Study participants were recruited at birth between 1998 and 2000 from 20 different U.S. cities.

For the present study, the researchers obtained DNA samples from 2,600 nine-year-old children. To avoid skewing their results with other factors that could affect telomere length, such as race and sex, the team only examined telomere length in African American boys.

The researchers further limited the study’s participants to those experiencing the most extreme levels of stress and nurturing. They rated each boy on several measures of early-life stress, such as economic status, parenting practices, and family stability, choosing 20 with the worst scores on these factors—excluding boys whose mothers had depression, which is linked to telomere length—and 20 with the most nurturing environments.

Despite the associations they observed, the researchers noted that it’s not yet clear whether early-life stress causes telomeres to shorten.

Even so, Notterman expressed hope that behavioral and social scientists hoping to link environmental and physiological factors might start also assessing telomere length. “The demonstration that telomere length is shortened by age nine supports the idea of early intervention,” Notterman said. Reduced telomere length is “not reversible as far as we know,” he added, and therefore “argues strongly for intervening early.”

But stress rarely affects people in the same way, noted Elissa Epel from the University of California, San Francisco, who was not involved in the research. “This study demonstrated this type of differential sensitivity to stress, based on genotype, with telomere shortening early in life,” Epel told The Scientist in an e-mail. “Although the sample is quite small, the data fits theory, and we should pay attention to this alarming story and extend it to other large samples when possible.”

Stacy Drury from the Tulane University School of Medicine in New Orleans, Louisiana, noted that gene-environment interactions may be at play. “My hope is that future studies are going to build upon this in a way that goes after really validated epistatic interaction, looking for an understanding of how these genes are actually biologically involved in this process,” she said.

Notterman’s team is extending its study of telomere length, and is in the process of taking repeat DNA samples from the participants, who are now 15 years old. 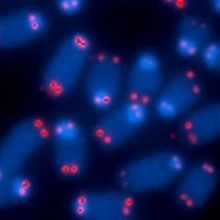 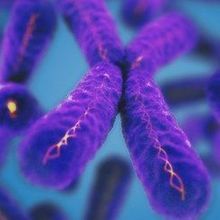