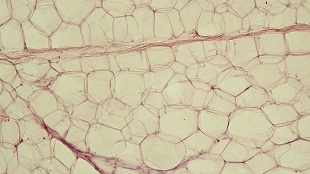 WIKIMEDIA, REYTANBrown fat cells convert chemical energy into heat in response to cool temperatures—a form of thermogenesis that is induced indirectly via the sensory nervous system and a well-known signaling pathway. But certain white and beige fat cells can sense temperature directly to activate the suite of genes involved in heat generation, according to a study published today (July 1) in the Proceedings of the National Academy of Sciences.

“It’s a really interesting paper because it convincingly shows that there is a cell-autonomous mechanism for the induction of thermogenesis in fat cells that is not dependent on the sympathetic nervous system,” said Sven Enerbäck of the University of Gothenburg in Sweden, who was not involved in the study. “To my knowledge this is the first time anyone has reported that.”

“What this is means is that fat cells have a completely unstudied signaling system that ends up in...

An important defense against both cold temperatures and obesity, nonshivering thermogenesis is primarily mediated by brown adipose tissue (BAT). When the nervous system detects cool temperatures, it releases a neurotransmitter that activates β-adrenergic receptors (β-ARs) on brown fat cells, which in turn activates a well-known signaling cascade that switches on thermogenic genes. More recently, it has been demonstrated that white fat cells, which primarily store energy rather than burn it, can also activate thermogenesis genes, but it was not clear how much these cells relied on the β-AR signaling pathway.

When Spiegelman and colleagues exposed mice lacking β-ARs to cool temperatures—10°C for 20 hours—heat generation in BAT between the shoulders was diminished, as the researchers had expected. But thermogenic genes were still activated in subcutaneous fat, the layer just beneath the skin—suggesting that these fat cells may regulate heat production through a β-AR–independent pathway. Since subcutaneous fat it is more likely to directly experience changes in temperature that other fat deposits, the researchers hypothesized that environmental temperature might directly contribute to their capacity for thermogenesis.

To test the idea, Spiegelman and his team exposed brown, beige, and white fat cells in culture to a range of temperatures between 27°C and 39°C. They found that temperatures below 33°C induced the activation of the thermogenic gene program in white and beige fat cells, but not in the brown fat cells, and that cellular respiration was also increased in white and beige cells. “It looks like classical brown fat cells depend on wiring from the nervous system,” said Speigelman, “but white cells and beige fat cells seem to respond directly to temperature.”

Finally, the researchers also demonstrated that β-ARs and other proteins that are crucial to the well-established signaling pathway for thermogenesis in brown fat cells were not required for induction of the process in white and beige fat cells. “That means there must be other pathways within fat cells which can activate thermogenesis,” Spiegelman said. “That was pretty surprising.”

“It’s a very provocative observation,” said Peter Tontonoz of the David Geffen School of Medicine at the University of California, Los Angeles. “The idea that an individual cells can detect cool temperatures to achieve a specific change in gene expression related to thermogenesis was very surprising to me.”

The study raises two key questions, Tontonoz added: What is the mechanism behind fat cells’ temperature-sensing capability, and how does that lead to specific changes in gene expression that induce thermogenesis?

“At this point, it’s a bit of a black box,” said Spiegelman, who plans to use proteomics to look for changes in proteins in the fat cells immediately after exposure to cool temperatures. His team also wants to find out whether the effects observed in culture are robust enough to have a significant impact on the physiology and energy balance in vivo, though Spiegelman admits it won’t be easy. “I’m not sure how you would do an experiment to show that, unless you found the signaling pathway and ablated it.”

However, if researchers can map this cell-autonomous thermogenic program in white and beige fat cells, it could in the future provide a new target for the treatment of obesity and metabolic diseases.

“The most logical way to combat obesity, and secondarily diabetes, would be to change the energy balance equation by increasing energy burning,” said Tontonoz. “Manipulating thermogenesis is an attractive idea as a way to do that . . . and you might be able to achieve it with drug that targets this pathway.”