At first, scientists suspected birds were simply startled by the loud noise. But a new study presented at the International Symposium on Acoustic Communication by Animals in Omaha in July suggests a more sophisticated mechanism: the caterpillar’s whistle appears to mimic a bird alarm call, sending avian predators scrambling for cover.

“This is the first instance of deceptive alarm calling between an insect and a bird, and it’s a novel defense form for an insect,” says Jessica Lindsay, the study’s first author and a graduate student in the lab of Kristin Laidre at the University of Washington. “I think that’s pretty...

When pecked by a bird, the caterpillars whistle by compressing their bodies like an accordion and forcing air out through specialized holes in their sides. The whistles are impressively loud, considering they are made by a two-inch long insect. They have been measured at over 80 dB from 5 cm away from the caterpillar, similar to the loudness of a garbage disposal.

In a laboratory experiment a few years ago, birds responded to caterpillar whistles by jumping away and abandoning their predation attempts. The authors of that study had attributed their behavior to a general startle response.

But to Lindsay, those whistles looked acoustically similar to alarm calls made by birds called “seet” calls. Many bird species produce and recognize seet calls, which are short, high-pitched tweets made when a flying predator is spotted. Upon hearing a seet call, birds will scatter and drop to low bushes for cover or freeze in place.

Lindsay, an undergraduate at the University of Montana at the time, played recordings of caterpillar whistles, black-capped chickadee (Poecile atricapillus) seet calls, and house finch (Haemorhous mexicanus) songs as a control to flocks of wild birds at backyard feeders. The bird feeders Lindsay targeted were most often visited by black-capped and mountain chickadees and red-breasted nuthatches, but numerous other avian species stopped by during the study.

Lindsay played her experimental sounds in random order, recording video and audio for two minutes before the playback, during the one-minute playback stimulus, and then for five minutes after the playback ended.

The birds ignored the finch song, but responded to the caterpillar whistles and seet calls in the same way: diving for cover, freezing, and making their own alarm calls. The behavior was the same regardless of species.

“For both the genuine alarm call and the caterpillar whistle, birds responded by fleeing the bird feeder and taking a long time to return or freezing in place,” says Lindsay. “If nuthatches were present, we would see them flicking their wings, which is a sign of distress.” 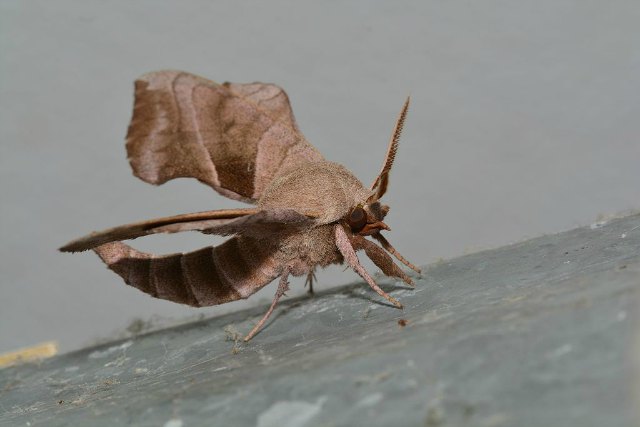 Those behavioral responses suggest these whistles may protect caterpillars by mimicking the alarm calls of their bird predators.

“Deceptive alarm calling is not particularly common, but it’s a strategy that has evolved in some species,” says Tom Flower, a behavioral ecologist at Simon Fraser University. An example is the brown thornbill (Acanthiza pusilla), a tiny bird that mimics the alarm calls of other birds to scare away larger, predatory birds when they attack the thornbill’s nestlings.

“We’ve found that initial responses to alarm calls can depend on a simple acoustic feature like peak frequency, so it seems plausible that a caterpillar sound could mimic a key feature of seet calls,” says Magrath.

Lindsay is currently analyzing the audio recordings from the playback experiments to uncover any patterns in the calls birds made in response to the different stimuli, as well as the acoustic structure of those calls.