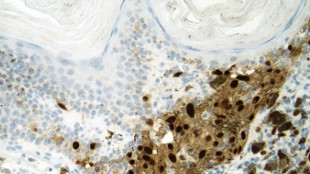 MITF immunostaining highlights malignant human melanocytesCASES JOURNAL, S. REPERTINGER ET AL.In 1971, Angelo Lamola—who was then at Bell Laboratories—used an unusual chemical, trimethyldioxetane, to produce DNA lesions in a test tube. Decades later, the same lesions, produced by sunlight, were linked to melanoma, an aggressive type of skin cancer. Now, researchers at Yale University and their colleagues have found that this reaction occurs in the skin cells of mice hours after ultraviolet (UV) light exposure. The team’s results are published today (February 19) in Science.

“The study is really interesting and provocative,” said David Fisher, a cancer biologist focusing on melanoma at Massachusetts General Hospital in Boston who was not involved in the work. “It underlines even more than what we knew previously: that melanin biochemistry is a two-edged sword—there are benefits and liabilities.”

Yale biophysicist Douglas Brash and his colleagues were doing time course experiments after irradiating murine melanocytes—the cells in the skin that produce melanin pigments and in which most melanomas arise—and stumbled onto an unusual observation: the melanocytes continued to produce CPDs four hours after exposure to either UVA or UVB light. “To a photochemist, this is totally preposterous. The difference between four hours and a millionth of a million of a second is as if something that should have taken one second at the time of the dinosaurs was just finishing up now,” said Brash.

Moving into a mouse model, the researchers next found that, to form CPDs, melanocytes required melanin and superoxide, a type of reactive oxygen species. The researchers also detected these CPDs in another type of skin cell, keratinocytes, which receive melanin from melanocytes. Both the red-yellow and brown forms of melanin produced the CPDs, although the former—typically found in fair-skinned individuals—was associated with more-efficient CPD production. This finding was consistent with a previous unexpected observation—that mice with a redhead genetic background have a higher risk of melanoma, even in the absence of UV light.

“At this point, the reaction began to ring a bell and we remembered that a 1971 paper described CPD formation that occurs in the dark without UV light,” said Brash, referring to Lamola’s work. The researchers then tested whether this reaction indeed occurred in cells, finding evidence to suggest that both UVA and UVB light activates enzymes that produce a reactive oxygen and nitrogen species, which together create a higher-energy form of melanin. This melanin fragment, containing the energy of a UV photon, transfers this energy to DNA without the need for direct exposure to UV light.

“This excited electron reaction typically only occurs in fireflies and other bioluminescent lower organisms,” said Brash.

The authors further found evidence to suggest that these melanin fragments are able to enter the nucleus and exert negative effects.

“By showing that CPDs form slowly in the dark, the authors have implicated an energetic excited state of a molecule other than DNA [in CPD formation],” said Bern Kohler, a photochemist at Montana State University who was not involved in the work. “The fact that this damaging molecule appears to be derived from the important photo-protective molecule melanin is an intriguing photochemical irony. It is a surprising plot twist in the field—analogous to finding out that one of the good guys, melanin, may actually be a bad actor under certain conditions.”

In culture, human melanocytes also generated these delayed CPDs in response to both UVA and UVB, the Yale team found.

“This is a beautiful study that goes a long way to explain our previous observations,” said Edward De Fabo, a professor emeritus at George Washington University, whose group found that melanin requires UVA but not UVB radiation to initiate melanoma.

“This new cellular pathway is an exciting discovery, another way DNA can be damaged and suggesting that it may be important in causing melanoma,” said chemist John-Stephen Taylor of Washington University in St. Louis, who penned an accompanying perspective article. “It also provides a reason why UVA exposure is carcinogenic.”

“This may be the tip of an iceberg,” said Brash. “A new kind of bioluminescence chemistry we didn’t know took place in mammals.”