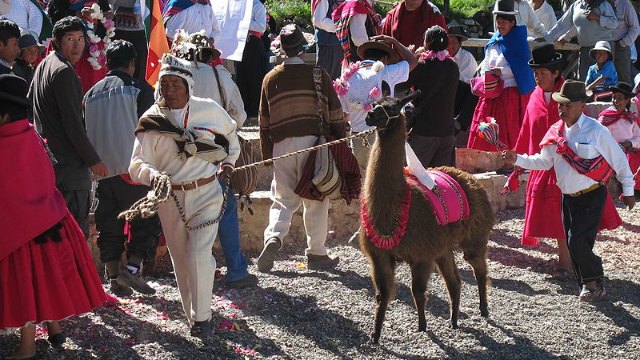 Aymara-speaking people of the Andean Altiplano in Copacabana, on the border of Lake Titicaca in BoliviaWIKIMEDIA, KILOBUGPeople who both travel to and live at high altitudes typically cope with lower oxygen levels by increasing red blood cell production, which can help get more oxygenated blood to organs and tissues. But the increase in red blood cells also makes blood thicker, stickier, and more difficult to pump, putting a strain on the cardiovascular system and leading to health issues, including heart failure and high blood pressure.

Some populations that live at high altitudes, such as Tibetan highlanders, have evolved to limit increases in red blood cell numbers. In contrast, Andeans that live at high altitudes overproduce red blood cells, yet manage to avoid the negative consequences. In a study published today (November 2) in The American Journal of Human Genetics, researchers report the first clues as to...

The authors “look at a specific population that has a unique evolutionary history,” says Tatum Simonson, who did not participate in the work but studies the physiology and genetics of high-altitude adaptation at the University of California, San Diego. “Because of that history, we can learn a lot about the genes that are involved in some of these responses to low oxygen and the phenotypes that are associated with them.”

The authors identified genes near the 10 spots of strongest selection, three of which are related to cardiovascular function.

The researchers studied a group of Andean highlanders who speak a language called Aymara and live at elevations topping 3,600 meters. “We can’t experiment genetically with humans, but nature has sometimes [done] experiments for us,” says coauthor Rasmus Nielsen of the University of California, Berkeley. By examining what happens when humans live with different environmental stressors, “we can learn something about the interactions between our genetics and the environment.”

The research team—led by Nielsen and Josef Prchal of the University of Utah—sequenced the genomes of 42 Aymaras from Bolivia. They then searched for possible areas of natural selection: genomic regions that differ from those of both Europeans and Native Americans not living at high altitudes.

Next, the authors identified genes near the 10 spots of strongest selection, three of which are related to cardiovascular function. Top hit BRINP3 is associated with an inflammation marker, fibrinogen, that often appears in cardiovascular disease. NOS2 codes for an enzyme that makes nitric oxide, is more active when oxygen levels are low, and is expressed in cardiac muscle cells. And another candidate gene, TBX5, encodes a transcription factor necessary for heart development.

It was a bit of a surprise to find that none of the most differentiated regions in Andean genomes were associated with the pathways that respond to low oxygen levels or regulate red blood cell numbers, Nielsen says. Instead, the authors theorize that the identified variants could potentially mitigate the negative effects of having extra red blood cells in another way: by modifying cardiovascular function and cardiac development.

In the future, Nielsen wants to move beyond associations with cardiovascular function toward understanding what the identified genes are doing in the context of the highlanders’ genomes. “Our next step is really to [track] down the specific functional effects of these mutations that we’ve shown to be under selection,” he says.

[The] huge question is, why do Andean and Tibetan highlanders have such different patterns?—Cynthia Beall,
Case Western Reserve University

Prchal agrees, and adds that finding the exact mechanisms of action may not be simple, but could have broad applications. “Uncovering the molecular basis and pathophysiology of [the increase in red blood cells] may be relevant to much more common disorders that we all are prone to,” he says.

“The SNPs [single nucleotide polymorphisms] that they identified as showing signals of selection were in noncoding regions of the genome,” explains Cynthia Beall, an anthropologist at Case Western Reserve University in Cleveland, who did not participate in the work. She says that the authors should test the “reasonable hypothesis” they propose that these regions exert regulatory forces on candidate genes. Beall adds that another “huge question is, why do Andean and Tibetan highlanders have such different patterns?”