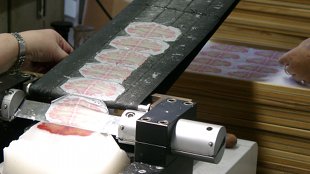 Microtome slicing a human brainAMUNTS, ZILLES, EVANS, ET AL.Researchers have painstakingly stained, imaged, aligned, and digitally reconstructed thousands of ultra-thin slices of a human brain to give the most high-resolution 3–D model of the organ ever created, according to a paper published online today (June 20) in Science.

“It’s a tour-de-force and a monumental amount of work,” said Arthur Toga, director of the Laboratory of Neuro Imaging, at the University of California, Los Angeles, who was not involved in the work. “It allows observation down into the cytoarchitectural level in a comprehensive way, which really hasn’t been done before,” he said. “That’s enormously valuable.”

A previous 3–D brain atlas devised by Korbian Brodmann at the beginning of the 20th century, and that is still used today, provides only gross identification of distinct architectural areas of the brain’s cortex, while more recent models based on magnetic...

Amunts and colleagues’ new 3–D model, which will be made freely available to the public, was based on the brain of a 65-year-old woman with no medical history of neurological or psychological illness. The brain was embedded in paraffin, then solidified into a block and cut into 7,404 slices, each 20 µm thick, using a machine known as a microtome.

Most of the slices were wrinkled by the microtome’s blade and many were even damaged. Knowing this was likely, the team had taken the precaution of performing an initial MRI scan of the brain prior to paraffin-embedding to create an undistorted low resolution 3–D spatial reference. After carefully straightening out, mounting, and staining each slice to reveal the component cells, the slices were scanned at high resolution and each image was aligned to the 3–D MRI reference model.

Once each of the alignments was completed, the entire stack of images was reconstructed into a 3–D image containing 1 terabyte of data. The entire project would not have been feasible without the recent advances in image analysis and computing power, said Amunts. Even so, it took almost a year to scan and digitize all the slices, and another 4 years to align each of the images, correcting for artifacts and distortions, to make the 3–D reconstruction. “There was an almost artistic attention to detail in the preparation of the tissue and how it was aligned,” said Toga.

The resulting 3–D atlas has a resolution of 20 µm x 20 µm x 20 µm, making cell bodies and local cellular architecture clearly visible. “It’s unprecedented,” said Nora Volkow, director of the National Institute of Drug Abuse in Bethesda, Maryland. “We have not had a model at this resolution ever before.”

Amunts plans to use the model to study changes in cell density and morphology across the entire cortex and to determine cytological borders between different cortical areas, thereby refining the areas described in Brodmann’s model. “In and of itself, for researchers in anatomy, this [model] is a goldmine,” said Volkow.

BigBrain will also act as a detailed reference map for other areas of neuroscience, she added. “One of the things I’m interested in is, if I see a pattern [of neuronal activity] in a particular cortical area, what are the underlying cells in that area like? Are they homogeneous, heterogeneous? I could now go to this histological map to find out. There’s no other way to look at that right now.”

The same could be done for other types of information, said Amunts. “We assume this reference brain will be used to integrate data, for example, from cellular neuroscience, from analysis of receptor distribution patterns, as well as data on physiological activity of the brain. . . . All these data can be, for the first time, integrated into one common reference space.”