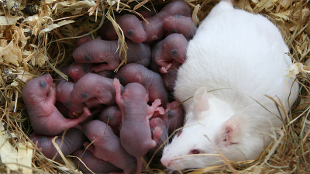 WIKIMEDIA, HIPPOCAMPUSAdult male mice will often kill mouse pups they encounter, unless the adults mated with a female three weeks earlier—a behavioral switch presumed to help protect the males’ own offspring from their father’s infanticidal tendencies. New work published this week (May 14) in Nature points to the role of a specific subpopulation of neurons in the medial preoptic area (MPOA), a brain region previously linked to paternal care, in mediating these opposing behaviors.

“The study does address one of the things that have not been clearly understood—the switch of parental behavior for males,” said C. Ron Yu, a neuroscientist at the Stowers Institute for Medical Research in Kansas City, Missouri, who was not involved in the study. “What enables these neurons to be responsive once mating occurs [is still unclear],” he added. “The downstream circuitry will be interesting to find out.”

“The question about [exactly] how this...

Molecular neuroscientist and geneticist Catherine Dulac of Harvard University and her colleagues were studying mutant mice that lacked a functional vomeronasal system, which normally processes pheromones, when they observed some females trying to mount both males and females. “The females displayed male sexual behavior,” Dulac recalled. “We were flabbergasted by these results.”

The researchers suspected that the vomeronasal system was essential to repress male-specific behaviors. If true, that would suggest that all mice carry the basic neural circuitry required for the stereotyped behaviors of both sexes, even though they typically only express male- or female-specific patterns. “This is surprising because there is this dogma on how the male brain and the female brain are organized at birth,” Dulac said.

Her team decided to look at mutant male mice lacking a functional vomeronasal system, and once again, saw the animals exhibit behaviors typical of the opposite sex. “We find that these virgin [mutant] males, instead of attacking pups, now are caring for the pups, building a nest, grooming the pups, carrying the pups to nest, huddling the pups. It’s very cute,” said Dulac. “If you remove the VNO [vomeronasal organ] control, the animals behave in part like the other sex.”

Taking a closer look at the mice’s brains, the team found that animals exhibiting maternal or paternal care have a lot of activity in the MPOA. This was not surprising, given that a significant chunk of the literature had previously linked the brain region to parental behavior. To better characterize the neurons involved, the researchers screened for molecular markers and found that neurons active during parental care activities tended to express the neuropeptide galanin.

Ablation experiments demonstrated that knocking out the galanin neurons caused parental behavior to disappear in both male and female mice, and optogenetic studies showed that activating the neurons led to the emergence of parental behavior male mice expected to kill pups. “From infantacidal behavior they are turning into loving dads,” said Dulac. “That’s just fascinating. We found the right button to push to activate parental behavior.”

Interestingly, she added, “[there was] exactly the same proportion of the galanin neurons in the male and the female brain, which means that there’s something really fascinating going on here. You have a very dramatic sexual dimorphism in [behavior], but the neurons driving parental behavior are there in both brains.”

“I think it does demonstrate that . . . the neurocircuitry that controls behavior exist in both sexes,” said Yu. “So the interesting question [is] whether there are specific mechanisms to suppress one [set of sex-specific behaviors] and allow the other.”

Of particular interest is the mechanism by which that flip is switched in mated males—which stop killing pups and instead begin to care for them—and what controls the three-week time lag between copulation and the behavioral change. “The key here seems to be the regulation of these neurons,” Dulac said. “How is the circuit working in different ways between males and females and in males in two different social contexts [before and after mating]?”

To get to the bottom of these questions, Dulac said, “we will need to identify the inputs to these neurons: What are the brain regions that send signals to these parenting neurons, and, in turn, how are these neurons functioning? Where in the brain do they send a signal to trigger parenting behavior? We’re now going into a more circuit-level analysis that will be really fascinating.”