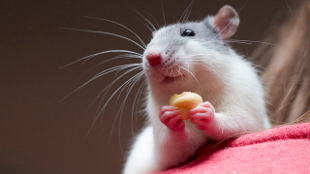 The team of researchers at the Brain Mind Institute in Lausanne, Switzerland, observed adult rats that had undergone traumatic experiences as adolescents, and found evidence of altered brain activity and epigenetic changes in the pre-frontal cortex that may explain the animals’ aggressive behavior. Because the findings match those from previous studies in humans, the study offers a robust rat model to further investigate the underlying neuro-biological causes and potential treatment avenues for increased aggression resulting from childhood trauma.

“This work represents a critical advancement in our understanding of how our environment influences our behaviors and shapes our brains,” Fiona Hollis, a neuroscientist at the Brain Mind Institute, who did not participate in the study, wrote in an e-mail...

Previous studies in rats, have clearly demonstrated the negative effects of stress, incurred soon after birth. Young pups, when separated from their mother, for example, develop into more aggressive adults. But whether stress incurred through adolescence had similar effects was unclear.

To investigate this question, the Brain Mind Institute’s Carmen Sandi and colleagues exposed 28- to 42-day-old adolescent rats to a fox odor or placed them in a vulnerable position on an elevated platform under bright light for a few minutes every day for 7 days. Rats exposed to such fearful stimuli grew up to become “bullies,” displaying pathological violence against any new rat introduced to their cage. Control rats that were not exposed to fearful stimuli as adolescents, one the other hand, were significantly less aggressive toward intruders, as adults.

Rats stressed in adolescence also presented anxiety and depression-like behaviors as adults; exhibited increased activity in the amygdala, the part of brain associated with fear responses; and showed lowered activity in the orbito-frontal cortex, a part of the pre-frontal cortex. These specific brain activity patterns have been linked to aggression and violence in humans. Additionally, the stress-exposed adolescent rats, as adults, displayed hormonal irregularities, namely high testosterone and low corticosterone levels—another pattern associated with increased aggression and violence in humans.

The effects of early-life adversity percolated right down to the level of the rats’ DNA. The researchers observed key epigenetic changes in the pre-frontal cortex, the brain region involved in social behavior and conduct. These included alterations in histone acetylation in the promoter region of the gene for monoamine oxidase-A (MAO-A) , leading to enhanced expression of the enzyme, which is known to break down serotonin—a neurotransmitter that contributes to general feelings of well-being and happiness. Notably, when the researchers injected an inhibitor of MAO-A in the “bully” adult rats, the animals became less aggressive. These results demonstrate the possibility of pharmacologically reversing the childhood abuse-induced aggressive tendencies in adults.

“The study consolidates the hypothesis that, altered serotonin signaling in limbic neural circuits, may form the core mechanism of stressed-induced pathological aggression,” Alexandre Dayer, a neuroscientist specializing in psychiatry and developmental neuroplasticity at the Geneva University Medical School, who was not involved in the study, said in an e-mail.

The stress protocol only seemed to bear long-term effects in young adolescent rats, however; the same stress protocol on healthy adult rats, failed to produce similar behavioral changes. This suggests that trauma incurred early in life, but not in adulthood, can deeply interfere with the neural programming and physiology, thereby setting the stage for aggressive manifestations in adult life. “These findings are in line with and extend further those using other rodent and non-human primate models in which early life stress, as opposed to stress in adulthood, can cause long-lasting increases in aggressive behaviors,” neuroscientist Alexa Veenema of Boston College wrote in an e-mail.

Furthermore, author Carmen Sandi added, the study “highlights the importance of developing social programs and scientific research initiatives to offer valid treatments for individuals that have been victimized early in life.”