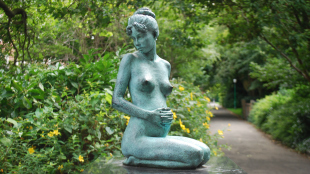 WIKIMEDIA, JEAN HOUSENPopular thinking has held that as a baby works his way through a birth canal teeming with microorganisms, his body is colonized with its first commensal bacteria. But a new study shows that a bevy of microbes exist in the womb.

The findings, published today (May 21) in Science Translational Medicine, add to a growing body of literature suggesting that tissues once thought to be germ-free are crawling with microbes, and that babies’ introduction to the microbial world comes from multiple maternal sources.

“[It’s an] interesting study that continues to build the snowball that no tissue in the human body is sterile, including reproductive tissues and, for that matter, the unborn child,” Seth Bordenstein, a biologist at Vanderbilt University who was not involved in the work, said in an e-mail to The Scientist.

“Based on the sum of evidence it is time to overturn the sterile womb paradigm and recognize the unborn child is first colonized in the womb,” said Bordenstein.

Throughout her training in obstetrics, Kjersti Aagaard was taught that the womb is a sterile sanctuary for baby to develop. “The only time it’s not is when we have a pathogenic infection,” said Aagaard, who studies the in utero environment of humans and animal models at Baylor College of Medicine and Texas Children’s Hospital. But the evidence didn’t seem to support such an idea.

In 2012, Aagaard and her colleagues found that while the vaginal microbiome did change during pregnancy, it didn’t resemble the microbial makeup of newborn babies: the vagina harbored bacterial communities of about 80 percent Lactobacillus, while newborn humans have a relatively greater abundance other taxa, such as Actinobacteria, Proteobacteria, and Bacteroides. “We were curious about where microbes in the infants’ gut are coming from,” said Aagaard, who decided to look for bacteria in the placenta.

In her latest study, Aagaard’s team collected placental tissue from 320 mothers immediately after they gave birth and documented diverse microbes, including E. coli, Bacteroides, Prevotella tannerae, and Neisseria lactamica, among others. In terms of species composition, the placental microbiome more closely resembles the mother’s oral microbial community than any other site on the body. But when Aagaard’s group looked at the metabolic pathways of the bacteria, “interestingly, they’re far overrepresented for metabolism of cofactors and vitamins relative to other body site microbiomes,” such as the gut or the mouth.

Aagaard says that the placental microbiome likely represents a baby’s first meeting with the microbial world. The birthing process, then, would be the second stop on a tour of the maternal microbiome. Once on the outside, a baby’s first embrace with his mother is really a group hug with her skin microbiome. And then there’s breastmilk, which for many decades was also considered sterile, but which is in fact a creamy bacterial soup.

“The overwhelming dogma before the microbiome world really started was that milk was sterile, that the only time you could culture an organism out of milk was when a woman had mastitis,” an infection of the breast tissue, said Mark McGuire, a milk researcher at the University of Idaho. So when Complutense University’s Rodríguez first began examining breast milk in the 1990s and found evidence that it served as a potential source of microbes in infant feces, many people didn’t believe him. They assumed that his samples were contaminated, “maybe from the mother’s skin or maybe the mouth of baby,” he said, but the bacterial strains he found in breast milk didn’t exist in the mouth or on the skin. And later, his group confirmed that these breast-milk bacteria were finding their way into the infant gut.

In 2011, McGuire’s team characterized the microbiome of human breast milk from 16 women. “It’s quite a diverse [microbial] community,” McGuire told The Scientist. The most abundant bacteria were Streptococcus, Staphylococcus, Serratia, and Corynebacteria, although each woman’s sample was different. “It was very personalized,” said McGuire. “Part of that personalization means she’s sampling her environment and providing that environment to her offspring, and maybe that’s a way to train the immune system and help the infant expand what it’s going to be exposed to early in life.”

Research by Rodríguez, Aagaard, and others is now looking into what impacts these various microbial sources might have when babies encounter them. Yesterday (May 20), Aagaard reported in Nature Communications that macaques who ate a high fat diet during pregnancy and lactation had babies with altered gut microbiomes. Although it’s not yet known what’s driving these changes, “clearly breastfeeding is a key and critical component,” said Aagaard—“not just how it introduces and influences the gut microbiome of the infant, but how it changes its whole metabolic milieu.”

While many questions remain, it’s pretty much taken for granted that the microbial communities of the placenta, vagina, and breast milk are important for fetal and infant development. But there is also an emerging appreciation for the role of the mother’s microbiome during pregnancy and lactation on the health of the woman herself. For instance, a 2012 study in Cell found that gut microbiome changes during pregnancy correlate with gains in body fat and dips in insulin sensitivity in mice exposed to the bacteria.

Several years ago, Rodríguez stumbled upon the idea that the microbiome of breast milk is important for the health of the mother. Mastitis, which can cause such severe pain and is often treated with antibiotics, is characterized by a “huge dysbiosis” of the breast-milk microbiome, said Rodríguez. A single strain of pathogenic bacteria would dominate the sample, while Lactobacillus would disappear.

McGuire’s wife and colleague, Michelle (Shelley) McGuire, a lactation researcher at Washington State University, recently got a similar result in when she and her colleagues collected breast milk samples from a group of women. Once in a while the researchers would find a bacterial community that was dominated by a single strain, and in those cases, “nine times out of 10 [the woman with the dysbiosis] had taken an antibiotic or complained there was a little discomfort in that breast,” Shelley McGuire said. “We could see it in her milk.” (The results of this work are still unpublished.)

The lack of Lactobacillus levels in the milk that Rodríguez observed offered him an opportunity to test whether bacteria in breast milk originate in the gut. He designed a study in which women took supplements containing the missing bacteria, and found that, sure enough, the same strains of Lactobacillus showed up in their breast milk. Unexpectedly, after about three weeks on the supplements, the women reported that their mastitis had cleared up. “For the first time we said, Maybe this is important for the treatment of mastitis or painful breastfeeding,” said Rodríguez, whose team is now wrapping up subsequent trials to treat mastitis during breastfeeding with bacteria, rather than antibiotics.

And even when not lactating, the breast itself has its own microbiome, according to the work of Gregor Reid, a microbiologist at Western University and Lawson Health Research Institute in London, Ontario, who suspects that the bacteria in the breast might play a role in disease, such as cancer. But to look for a link between the breast microbiome and health requires characterizing what’s normal, which is not so easy, researchers agree. One thing that is becoming clear, however, is that a healthy microbiome, whether it’s in the baby or the mother, harbors a diversity of bacteria. “In the big picture of life, we’re just appreciating that diversity is a really good thing to have,” said Aagaard. “The more diversity we can pick up, probably the healthier we’ll be over time.”