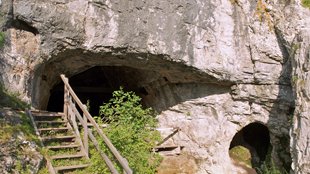 Cave where Neanderthal toe bone was foundBENCE VIOLAA high-quality genome sequence obtained from a female Neanderthal toe bone reveals that the individual’s parents were close relatives and that such inbreeding was prevalent among her recent ancestors, according to a paper published today (December 18) in Nature. But the sequence also reveals that interbreeding occurred between Neanderthals and other hominin groups, including early modern humans.

“Did humans evolve like a constantly branching tree? A lot of people think so,” said Milford Wolpoff, a professor of anthropology at the University of Michigan, who was not involved in the study. “But there’s also been this thread of thought, by some people like me, that humans evolved more like a network, where there are different populations and they split and sometimes they come back together and they mate.” The new toe bone sequence data, he said, is “really important because...

The toe bone was found in a cave in Denisova, Siberia, where the conditions for DNA preservation are near-perfect. “The cave year-round has an average temperature of zero degrees Celsius and that’s probably helping to contribute to the preservation,” explained John Hawks, a professor of anthropology at the University of Wisconsin, who also did not participate in the study.

Indeed, the toe bone and its DNA were so well preserved that it was possible to obtain sequence data that “is on the same level, as far as quality goes, as many other modern human genomes,” said Kay Prüfer, an evolutionary geneticist from the Max Planck Institute for Evolutionary Anthropology in Leipzig, Germany, who led the study. “For every position in the genome we have on average 50 fragments covering it, which is amazing,” he said. Just how amazing? Previously sequenced Neanderthal genomes have average coverages of 0.5 to 1.3.

Also amazing, was the fact that the toe bone was Neanderthal at all. Previous bone and tooth samples found in the cave had yielded high-quality DNA sequences identified as belonging to a new and different group of hominins called the Denisovans, who were named after the location. “We were expecting that it [the toe] would be another Denisovan,” said Prüfer, “but, to our surprise, it wasn’t.”

Another surprise followed. The high degree of coverage allowed the team to observe subtle sequence differences that were present in the maternal and paternal copies of the chromosomes. But “what we actually saw was that there are long stretches where the two copies of the chromosomes were actually very, very similar,” said Prüfer, “and that essentially means that the two parents must have been closely related.” From the team’s calculations, the parents were likely  half siblings, an uncle and niece, or similar. And further sequence analysis indicated that inbreeding had been typical among the individual’s recent ancestors. In fact, the level of variation “was among the lowest observed for any organism,” Prüfer said.

They also showed that Denisovans contained both Neanderthal DNA sequences—most similar to that from the Altai Neanderthal—and sequences absent from Neanderthals and modern humans, which thus appear to have come from an unknown archaic hominin group.

“The general picture is that we have lots of different admixtures. So we see that any type of human group . . . seems to have some exchange of [genetic] material with another group,” Prüfer said.

Besides revealing the complexities of ancient hominin mating habits, the high-quality Neanderthal and Denisovan genomes should also help scientists better understand modern humans, said Prüfer. “We can now ask: What are the variants on the human lineage that are definitely new and that we all have and. . . that enabled us to do certain things that Neanderthals and Denisovans didn’t accomplish, including growing to now seven billion people, living all over the planet, and having airplanes to go from A to B? If there is some genetic basis to that, then it is hidden in these changes,” he said.

The good news, said Hawks, is that such genetic changes are few. “There is not that much that sets modern humans apart from these ancient people . . .  and that’s a pretty cool message,” he said.