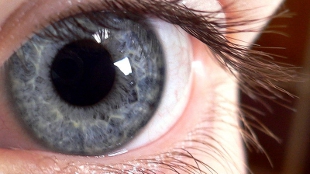 Wikimedia, Steve JurvetsonWhat do an orgasm, a multiplication problem and a photo of a dead body have in common? Each induces a slight, irrepressible expansion of the pupils in our eyes, giving careful observers a subtle but meaningful signal that thoughts and feelings are afoot.

For more than a century, scientists have known that our pupils respond to more than changes in light. They also betray mental and emotional commotion within. In fact, pupil dilation correlates with arousal so consistently that researchers use pupil size, or pupillometry, to investigate a wide range of psychological phenomena. And they do this without knowing exactly why our eyes behave this way. “Nobody really knows for sure what these changes do,” said Stuart Steinhauer, who directs the Biometrics Research Lab at the University of Pittsburgh School of Medicine.

While the visual cortex in the back of the brain assembles the images we...

The iris is made of two types of muscle: in a brightly lit environment, a ring of sphincter muscles that encircle and constrict the pupil down to as little as a couple of millimeters across; in the dark, a set of dilator muscles laid out like bicycle spokes, which can expand the pupil up to 8 millimeters—approximately the diameter of a chickpea.

Cognitive and emotional events can also dictate pupil constriction and expansion, though such events occur on a smaller scale than the light reflex, causing changes generally less than half a millimeter. But that’s enough. By recording subjects’ eyes with infrared cameras and controlling for other factors that might affect pupil size, like brightness, color, and distance, scientists can use pupil movements as a proxy for other processes, like mental strain.

Princeton psychologist Daniel Kahneman showed several decades ago that pupil size increases in proportion to the difficulty of the task at hand. Calculate 9 times 13, and you pupils will dilate slightly. Try 29 times 13, and they will widen further and remain dilated until you reach the answer or stop trying. As Kahneman says in his recent book, Thinking Fast and Slow, he could divine when someone gave up on a multiplication problem simply by watching for pupil contraction during the experiment.

“The pupils reflect the extent of mental effort in an incredibly precise way,” Kahneman told the German news magazine Der Spiegel, adding, “I have never done any work in which the measurement is so precise.” When he instructed subjects to remember and recite a series of seven digits, their pupils grew steadily as the numbers were presented one-by-one and shrunk steadily as they unloaded the digits from memory.

Subsequent research found that the pupils of intelligent people (as defined by their SAT scores) dilated less in response to cognitive tasks compared to those of less intelligent participants, possibly indicating a more efficient use of brainpower.

Scientists have since used pupillometry to assess everything from sleepiness to introversion, race bias, schizophrenia, sexual interest, moral judgment, autism, and depression. And while they haven’t been reading people’s thoughts per se, they’ve come pretty close.

“Pupil dilation can betray an individual’s decision before it is openly revealed,” concluded a 2010 study led by Wolfgang Einhäuser-Treyer, a neurophysicist at The Philipp University of Marburg in Germany. In the study, participants were told to press a button at any point during a 10 second interval, and their pupil size correlated with the timing of their decision. The dilation began about 1 second before they pressed the button and peaked 1 to 2 seconds after.

But are pupils informative outside the lab? Men’s Health Magazine says you can tell when it’s “time to make your move” by watching your date’s pupils, but some skepticism is warranted. “It is unclear to me to what extent this can be exploited in completely unrestrained settings,” Einhäuser-Treyer wrote in an email, pointing out that light conditions could easily interfere with attempts at interpersonal pupillometry.

Other efforts to exploit pupil dilations for purposes beyond scientific research have failed. During the Cold War, Canadian officials tried to develop a device they called the “fruit machine” to detect homosexuality among government employees by measuring how their pupils responded to racy images of women and men. The machine, which never worked, was to aid the government’s purge of gay men and lesbians from the civil service and thereby purportedly reduce their vulnerability to Soviet blackmail.

Pupillometry also became popular in the advertising industry during the 1970s as a way to test consumers’ responses to television commercials, said Jagdish Sheth, a marketing professor at Emory University. But the practice was eventually abandoned. “There was no scientific way to establish whether it measured interest or anxiety,” Sheth said.

Indeed, pupillometry is limited in its ability to distinguish between the many types of cognitive and emotional processes that can affect pupil dilation. “All we can do is watch the change at the end,” Steinhauer said. “We can't monitor everything going into it.”

Still, he added, our eyes are easy to observe and provide a sensitive indicator of cognitive, emotional, and sensory response, making pupillometry a valuable tool for psychological research. “It's like having an electrode permanently implanted in the brain.”