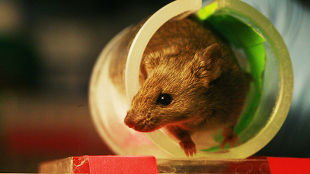 WIKIMEDIA, RAMAWhen a group of genetically identical mice lived in the same complex enclosure for 3 months, individuals that explored the environment more broadly grew more new neurons than less adventurous mice, according to a study published today (May 9) in Science. This link between exploratory behavior and adult neurogenesis shows that brain plasticity can be shaped by experience and suggests that the process may promote individuality, even among genetically identical organisms.

“This is a clear and quantitative demonstration that individual differences in behavior can be reflected in individual differences in brain plasticity,” said Fred Gage of the Salk Institute for Biological Studies in La Jolla, California, who was not involved the study. “I don’t know of another clear example of that . . . and it tells me that there is a tighter relationship between [individual] experiences and neurogenesis than we had previously thought.”

One logical way to study this phenomenon is to look at brain plasticity, or how the brain’s structure and function change over time. Plasticity is hard to study, however, because it mostly takes place at the synaptic level, so Kempermann and his colleagues decided to look at the growth of new neurons in the adult hippocampus, which can easily be quantified. Earlier studies have demonstrated that activity—both physical and cognitive—increases adult neurogenesis in groups of genetically identical mice, but there were differences between individuals in the amount of neuron growth.

To understand why, Kempermann and his colleagues housed 40 genetically identical female inbred mice in a complex 5-square-meter, 5-level enclosure filled with all kinds of objects designed to encourage activity and exploration. The mice were tagged with radio-frequency infer-red (RFIR) transponders, and 20 antennas placed around the enclosure tracked their every movement. After 3 months, the researchers assessed adult neurogenesis in the mice by counting proliferating precursor cells, which had been labeled before the study began.

Gage cautions about pinning all the differences on the environment, however. Although the mice in the study were genetically identical, he said, they were not behaviorally identical to begin with: clearly some variation occurs at a very early stage that makes them more or less prone to explore. “It’s incorrect to think of it that the environment caused the difference between the mice,” he said. “The difference was already there, and the environment amplified that difference. My own personal bias is that there are likely genetic events that happened at germline, or somatic events over time,” that set the stage for these subtle behavioral differences that are subsequently amplified.

The findings could help explain why human identical twins raised in the same family end up with different personalities. “These kinds of processes are notoriously difficult to study in people, because we can’t control human environments experimentally,” said Eric Turkheimer, a psychologist at the University of Virginia, who studies how differences in the personalities of identical twins emerge over time. “That’s why an animal model is so important.”

Indeed, the research provides a novel approach to studying the role of the environment in shaping personalities. “This idea of having Infrared implants in the animals and watching them form patterns of behavior over time in this wonderfully complex 3D maze is a really useful tool,” said Gage. “I think it will be very helpful for those of us interested in individual differences [in brain plasticity],” and could be used to explore the genomic basis of the initial behavioral differences between the mice.

“We’ve come up with an animal model to help address the ways living our lives make us who we are,” said Kempermann. “So we have touched on an approach that allows us start to get the small part of an answer to a very big question.”