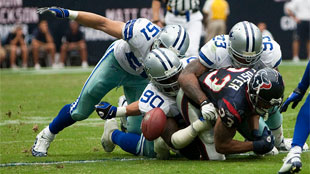 Houston Texans vs. Dallas CowboysWIKIMEDIA, AJ GUELIn May 2012, former National Football League (NFL) player Junior Seau shot himself in the chest. An autopsy, conducted by the National Institutes of Health, revealed that Seau suffered from chronic traumatic encephalopathy (CTE)—a condition where repeated blows to the head, even mild ones, can trigger the progressive loss of brain tissue. He was the latest of a number of former athletes who have taken their own lives and were the discovered to have the neurological hallmarks of the disease. The string of suicides has pushed awareness of CTE to fever pitch, and earlier this week, the NFL and General Electric jointly pledged $60 million over 4 years to research on diagnosing and treating brain trauma.

CTE has a long history. It was first documented in the 1920s by New Jersey medical examiner Harrison Martland, who noticed that boxers slowly developed a form...

Since 2008, McKee and colleagues a “brain bank” at the Center for the Study of Traumatic Encephalopathy (CSTE), based at Boston University School of Medicine, have collected and studied the brains and spinal cords of athletes, military veterans, and civilians who sustained mild, repetitive brain traumas. At least 68 of these brains showed signs of CTE, including 33 out of 34 NFL players. “We have individuals with no recognized concussions but thousands of sub-concussive blows in our brain bank,” said Robert Cantu, co-director a of the CSTE.

The culprit behind CTE is a protein called tau, which accumulates in destructive bundles within neurons. The same protein is also a feature of Alzheimer’s disease, but it is deposited in different parts of the brain in CTE victims and is not accompanied by that other classic Alzheimer’s protein—amyloid-beta.

In healthy brains, Tau is concentrated within the axons of neurons, and sticks to the long microtubules running inside. The protein helps to maintain the shape of the cell, and to transport nutrients and other molecules from one end to another. When the brain suffers even mild blows, axons stretch and tau somehow becomes phosphorylated. It falls off the microtubules and starts to clump together.

The details of this process are still unclear, however. Metabolic changes, inflammation, the immune system, and other types of brain cells may also be involved. “How this all comes together in a perfect storm is not clear,” said Cantu.

Getting at the root cause of CTE has proven challenging, as “most of the science has been done after death,” said McKee. Fortunately, newly developed mouse models recapitulate the tau bundles and symptoms of CTE following trauma to the head, and should help to unravel CTE’s mechanisms and point to ways of preventing the disease.

McKee suspects that the process is initially reversible. With rest, the clumps of tau should disassemble and rejoin the microtubules. But if people keep on accumulating hits, the clumps continue to build and eventually destroy the neuron. Using the CTSE brain bank, McKee has graded CTE into four stages of severity, and suspects that the more years of sport a person plays or the younger they are when they start taking hits, the higher their stage. “We still need to be sure of that, though,” she said.

Other big questions remain. Are some players more susceptible to long-term damage than others, and do their genes affect their risk? And how common is CTE, especially among individuals who show none of the classic symptoms?

Answering the latter question will require a reliable biomarker that can detect the build-up of tau in a living brain. “If the person has the cognitive and emotional symptoms, and has had a very high level of brain trauma over their life, you can certainly suspect CTE, and you’re probably going to be right a very high proportion of time,” said Cantu. But currently, only an autopsy will confirm the diagnosis.

Some groups are trying to detect structural signs of the disease using brain-scanning tools, but McKee thinks that these will not be specific enough to distinguish CTE from other brain disorders. Other researchers are trying to detect chemicals produced when tau breaks down, with a view to developing blood tests for the presence of tau. But although such tests might make doctors more alert to the possibility of CTE, Cantu believes that such biomarkers also suffer from a specificity problem, since they do not show where Tau is building up in the brain.

The best approach will be to develop a marker that could be injected into the blood and could tag tau in the brain so the protein can be viewed with a brain scanner. “Several companies are on the cusp of finding that biomarker,” Cantu said.

Earlier this year, one group announced the development of a biomarker called FDDNP that can be visualized on a PET-scan and used it to detect signs of tau in five living, retired NFL players. The preliminary study was promising, although since FDDNP identifies both tau and amyloid-beta, it relies on patterns of deposition to distinguish CTE from Alzheimer’s. A tau-specific biomarker is still needed. “I think we’re close,” said Mckee. “Maybe in the next few years, we’ll have something reliable.”

Other aspects of CTE science are still in their infancy, however. “We are where we often are in the early stages of a disease: trying to understand and define it descriptively,” said McKee. But she is optimistic that important steps will be taken in the near future, not least because of the huge groundswell of support from sports organizations, the CDC, and others. “We’ve come a long way to understanding that even what seems like trivial injuries can have significant consequences,” she said.