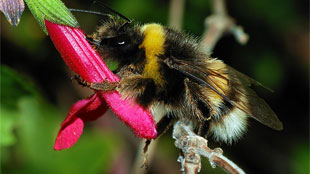 Buff-tailed bumblebeeWIKIPEDIA, ALVESGASPARIn the colonies of many ants, bees, and wasps, queens are the only females that reproduce. They enforce their privileged status through chemical control, emitting pheromones that make countless workers infertile. But ironically, these pheromones may have evolved from substances that showcased reproductive potential, rather than suppressing it.

Until now, scientists had only identified sterilizing queen pheromones in the domestic honeybee, black garden ants (Lasius), and a species of termite. Now, Annette Van Oystaeyen and Ricardo Caliari Oliveira from the University of Leuven, along with Luke Holman from the Australian National University, have identified similar pheromones in three more social insects: a desert ant (Cataglyphis iberica), the buff-tailed bumblebee (Bombus terrestris), and the common wasp (Vespula vulgaris).

These species have been separated by more than 145 million years of evolution, and they belong to lineages that independently evolved...

The results, published today (January 16) in Science, come from a tour de force of experiments. The team identified chemicals that were more common on the cuticles of queens than on those of her subjects; synthesised those chemicals; collected colonies of each of the three species and removed their queens; applied the chemicals to the monarch-free nests; and, weeks later, dissected the bodies of thousands of workers to see if their ovaries had developed. “It was a lot of work,” said Van Oystaeyen.

In all three cases, long alkanes were responsible for keeping the workers’ ovaries in check, and the researchers found that synthetic versions of these compounds were just as effective as pheromones from live queens. The sterilizing compounds were so similar among species that the wasp pheromones could also sterilise the workers of the desert ant, for example.

The researchers also collected data from 90 other studies, which looked at the substances found on the surfaces of social insects. Their data, representing 64 species and five separate origins of social behavior, showed that saturated hydrocarbons are, by far, the chemicals most commonly overproduced by queens relative to workers.

“It would be interesting to identify the molecular pathways involved in the production of those social pheromones, and determine how conserved they are across social and solitary species,” said Cedric Alaux from France’s INRA in an e-mail.

Alaux added that the results have implications for an old debate about how, exactly, queens control their subjects. If queens are actively suppressing the workers’ reproduction, they should trigger an evolutionary arms race in which workers resist the queens’ pheromones, and the queens consequently evolve new chemical tricks. “You’d expect vey quick evolution and big differences between different groups,” said Van Oystaeyen.

But that’s not what her team found. Instead, the results support a hypothesis based on mutual understanding rather than manipulation: the queens use their pheromones as honest signals of their own fertility, and the workers respond by foregoing reproduction. “If queens are very fertile, it makes sense for the workers to help them out,” said Van Oystaeyen.

“It’s all quite speculative, but we see that these hydrocarbons are also fertility signals in a lot of solitary and social species,” she explained. “We think that these fertility cues were used to attract males, and then gained an extra function when these groups evolved eusociality.”

But Abraham Hefetz from Tel Aviv University is dubious. “To me, it is like searching for the coin under the lamppost,” he said in an e-mail to The Scientist. “It does not make evolutionary sense to have such ubiquitous compounds as very specific and peculiar pheromones.”

Hefetz’s own studies contradict the new results. For example, he has found large amounts of 3-methyl nonacosane—a long alkane—on the workers of the same desert ant that Van Oystaeyen studied. In a related species, Cataglyphis niger, he found the same chemical on queens and workers in equal measure. “I guess time will prove whether they are right or wrong,” he said.