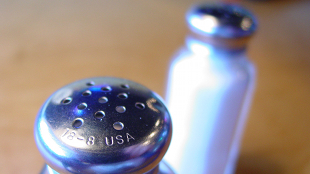 stock.xchng, SnackThe body’s sodium levels, water, and blood pressure were once believed to be relatively steady, with increased sodium excretion compensating for jumps in dietary sodium ingestion. But sodium levels may be subject to hormonally-regulated rhythms, independent of sodium intake, according to research published today (January 8) in Cell Metabolism.

Taking advantage of the restricted diet and constrained environment of men undergoing simulated missions to Mars, researchers discovered that their sodium levels rose and fell in roughly 6- to 9-day-long cycles, even at constant levels of sodium intake.

The findings are “a little bit against current dogma” of sodium balance, said Christian Koch, an endocrinologist at the University of Mississippi who was not involved in the research.

Because controlling people’s sodium intake is difficult in the real world, Jens Titze at Friederich-Alexander-University in Germany jumped at the chance to study men participating in the European Space Agency’s Mars500...

These included aldosterone, a steroid hormone whose functions include regulating salt reabsorption and blood pressure; and cortisol, another steroid hormone, that binds the same receptor as aldosterone, but is prevented from overstimulating this receptor in the kidneys by being converted to cortisone. Monitoring the ratio of cortisol to cortisone is a proxy for kidney health, said Friederich Luft, one of the senior authors of the paper.

The researchers collected “every drop” of urine for the entire duration of two different Mars500 simulations, which lasted 105 and 520 days, as well as measurements of body weight, blood pressure, and total body sodium. The men were fed diets with either 6 grams of salt—the maximum amount recommended the US Department of Human and Health Services—or 9 or 12 grams, a level closer to what most people in Europe and North America ingest daily. Regardless of sodium intake, however, Titze and his colleagues found that daily sodium excretion varied widely over the course of the simulations.

Sodium excretion did appear to obey patterns—but in cycles notably longer than the typical 24–hour circadian rhythm. For men in the 520-day Mars simulation, sodium excretion rhythms varied between a 7- and 9-day cycle. Interestingly, men involved in the 105-day simulation, who served on a night shift every 6 days, had sodium rhythms that obeyed a 6-day cycle, suggesting that sleep/wake cycles could be helping regulate this pattern.

Total body sodium also appears to follow a regular cycle, though the rhythm was much longer—possibly monthly—so the men weren’t followed long enough to determine the exact pattern, said Luft. If this cycle is 100 days, for example, “we’d need a real trip to Mars to figure it out,” he noted.

The researchers also found that night shifts appeared to boost levels of aldosterone, which helps the body retain sodium and could in turn lead to increased blood pressure. Although the findings should be repeated in real world conditions, they’re suggestive that perhaps “people working night shifts should refrain from sodium more than people not on the night shift,” said Markus Mohaupt, a nephrologist at Bern University Hospital in Switzerland, who was not involved in the study.

Luft and Titze also found that cortisol, whose main function is helping the body deal with stress, may regulate sodium excretion and total body sodium. Aldosterone and cortisol have other effects in the body, including aldosterone’s ability to regulate sodium appetite in the brain, said Koch. If increasing sodium ingestion alters these hormones, it could have far-reaching health effects, he noted.

But the notion that sodium excretion can vary widely day to day is not new, argued Graham MacGregor, a professor of cardiovascular medicine at the Wolfson Institute of Preventive Medicine in London. “From a wider perspective, the study has no impact at all,” said MacGregor.