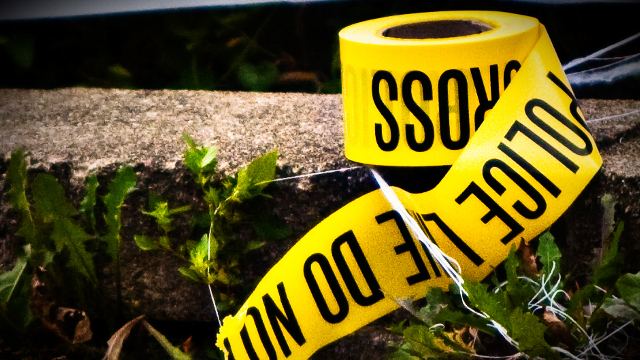 Update (January 26, 2022): Wyndham Lathem was convicted of first-degree murder in October 2021 and has now been sentenced to 53 years in prison, the Associated Press reports.

On July 27, The Chicago Tribune reported that there was an arrest warrant issued for Wyndham Lathem, a microbiologist at Northwestern University. The crime Lathem would later be charged with was brutal—26-year-old Trenton James Cornell-Duranleau, whose body was found in Lathem’s apartment, had been stabbed dozens of times.

But Lathem was nowhere to be found. As events unfolded over the following days, it became clear he had fled from Chicago to California with a second suspect, 56-year-old Andrew Warren, a University of Oxford employee from the United Kingdom visiting the states. Along the way, the two men apparently made an anonymous $1,000 donation in Cornell-Duranleau’s name to the Lake Geneva Public Library and another donation for...

Lathem had also sent a video to family and friends, “apologizing for ‘his involvement’ in the slaying,” according to the police, The Chicago Tribune reported. Finally, on August 4, the two turned themselves in to police.

Within a week of the warrant, Northwestern placed Lathem on administrative leave, and on August 7, Alan Cubbage, the vice president for university relations, announced Lathem had been fired as of August 4 “for the act of fleeing from police when there was an arrest warrant out for him.” The accomplished plague researcher now sits in a jail cell in Chicago.

Lathem had been a faculty member at Northwestern since 2007. His lab studied the virulent form of Yersinia pestis, the gram-negative bacterium that causes pneumonic and bubonic plague in humans. He had a successful career as an independent investigator, including participating in recent scientific conferences on chemical and biological terrorism defense.

He is well respected among his colleagues. In a request to get his client out on bond, Lathem’s attorney, Barry Sheppard submitted to the court 30 letters of praise and support from colleagues and friends. William Goldman, Lathem’s postdoctoral advisor at Washington University in St. Louis and now chair of the department of microbiology and immunology at the University of North Carolina (UNC) School of Medicine, was among them.

Wyndham was very excited about moving to the Pasteur and the denial of clearance came as a big surprise to us all.—Matthew Lawrenz,
University of Louisville School of Medicine

“He was the first person in my lab to work on pneumonic plague, which ended up being the focus of his independent career,” Goldman told The Scientist in a phone interview on August 19. “He really took over as the lead scientist on this, developing an animal model because our lab had mostly worked with cell and organ cultures,” he says. “He was excited about the novelty from the first time I met him. He is a high-energy scientist who puts himself into his work and cares about it deeply.”

“Wyndham is a talented and confident scientist,” Matthew Lawrenz, who studies Yersinia pathogens at the University of Louisville School of Medicine in Kentucky, wrote in an email to The Scientist on August 20. Lawrenz was also a postdoc at Washington University when Lathem was there, in Virginia Miller’s lab, which also studies Y. pestis.

Lawrenz says that since he started his own lab, Lathem “has been very supportive, providing advice and reagents, invitations to meetings, and has been a good colleague. We have stayed in touch and usually see each other both professionally and socially at scientific meetings two or three times a year.”

“When he was a postdoc he was very good about training/mentoring more junior people in the lab,” Miller, now also a professor at UNC and married to Goldman, wrote in an email to The Scientist. But he wasn’t a “social butterfly.”

Goldman says that he knew very little about Lathem’s personal life. “He was not unfriendly and would go to lab social activities, but I had never been to his house. In the lab, he was very engaged and helpful with everyone but he was very private.”

Lathem had been in contact with the Pasteur Institute in France in 2016, to potentially lead a research lab there. According to a press release issued by the organization on August 9, 2017, and shared with The Scientist, a scientific committee in charge of recruitment had approved Lathem’s application to head a research unit at the end of 2016.

But “Wyndham Lathem did not receive security clearance from the French authorities (Ministry of research). This clearance is essential for positions, which involve working with dangerous pathogens. No reason was given for Lathem’s security clearance being denied. The recruitment was not pursued. The offer was withdrawn at the beginning of 2017.” The Pasteur Institute’s press office would not provide further comment to The Scientist.

“I talked to him after [the Pasteur Institute] job fell through and he was disappointed and we discussed strategies for dealing with it,” says Goldman. “Wyndham had plans to go, so he had to readjust to the idea of rebuilding his group at Northwestern and develop strategies for doing that.”

“Wyndham was very excited about moving to the Pasteur and the denial of clearance came as a big surprise to us all,” adds Lawrenz.

The US Centers for Disease Control (CDC) specifies four biosafety levels for handling infectious microorganisms and laboratory animals in research and clinical laboratories. Biosafety Level 3 (BSL-3) labs, such as Lathem’s at Northwestern, are those that handle pathogens that may cause serious or potentially lethal disease via inhalation.

It was not domestic in nature, like a husband-wife or boyfriend-boyfriend or a love triangle. It was a little more dark and disturbing, as far as I’m concerned.—Brendan Deenihan,
Chicago police

“An individual who works with select agents and toxins must first undergo a security risk assessment performed by the FBI’s Criminal Justice Information Services Division (CJIS),” according to a press officer at the CDC. He/she says the agency is unable to provide names of labs or persons authorized to work with select agents for security reasons.

The comments to The Scientist from former colleagues of Lathem were made after the crime had been publicized, but before other disturbing details on Lathem’s alleged plot emerged.

On Sunday, August 20, after both men appeared in front of a judge at the Cook County Circuit Court in Chicago, The New York Times reported that prosecutors alleged the duo had communicated electronically for months about murder and suicide. The plan, according to the Times, was to have Warren record Lathem killing Cornell-Duranleu, Lathem’s boyfriend, and then shoot Lathem and kill himself.

“It was not domestic in nature, like a husband-wife or boyfriend-boyfriend or a love triangle,” said Brendan Deenihan, a commander for the Chicago police, according to the Times. “That was not the motive. It was a little more dark and disturbing, as far as I’m concerned.”

After learning about the details of the case on August 20, “I’m afraid that I can’t comment further at this point—not because I don’t stand by what I wrote, which was primarily about Wyndham’s professional accomplishments and integrity, but because I just don’t know what to say right now,” Goldman wrote to The Scientist.

“Like everyone I know, I was completely surprised by the events surrounding Wyndham over the past few weeks,” Lawrenz wrote in an additional email communication to The Scientist on August 21.

Neither Goldman nor Lawrenz were recipients of the videos Lathem had sent. According to Lawrenz and Miller, neither had submitted letters to Lathem’s lawyers. Miller and Lawrenz both told The Scientist that they were not requested to do so.

Lathem’s lawyer’s attempt to get his client out on bond via the esteem of his colleagues failed. “The court has reviewed his professional and academic achievements—some of the finest in the world,” Judge Adam Bourgeois said, according to the Times. “Has nothing to do with this, though.”

“Doctor Lathem will be entering a plea of not guilty at his arraignment,” writes one of Lathem’s lawyers, Adam Sheppard, in an email to The Scientist. “While we understand the judge’s basis for denying bond in bond court, we continue to believe that Doctor Lathem’s background, roots in the community, and history of upstanding citizenship demonstrate a person who is likely to comply with the conditions of bond if released. As new information becomes available, we may request the judge who presides over his case to revisit the issue of bond.”